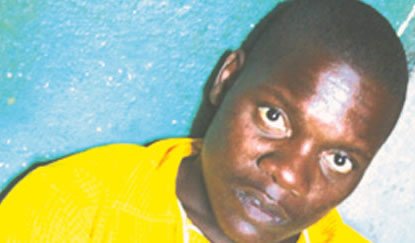 In a suspected “central locking system (runyoka)” case, a 27-year-old Chitungwiza man is struggling to find an antidote for his penis which has been eternally erect for the past TWO WEEKS!

Farai Mutamira of House No 4023 Unit D Chitungwiza, contrary to what his name suggests, is not happy! He is said to have his one eyed monster ‘refusing’ to ‘ease down’ to its flaccid state after his last session of sexual intercourse with his girlfriend, Nyaradzo Maphosa (27).

But some baffled neighbours speculated that he might have slept with a married woman who was ‘locked’ under the central locking system (runyoka). “He has been struggling with his penis for two weeks now. It remains erect and it has never been flaccid since this problem began.

“We believe that he has been bewitched with the central locking system (runyoka) after he had sex with a married woman. “I suspect that the husband had devised a central locking system for the woman without her knowledge. “Her husband could have done it to protect his wife from intruders,” a neighbour speculated.

And the pained man is desperate and would not hesitate to show his throbbing joystick which has not been giving him any joy of late, to anyone who may have the least idea how to help. H-Metro also got shots of the restless seed-sower!

The neighbours speculated that the woman’s husband could have died and gone with the “keys” to unlock the wife! When H-Metro visited Farai at his place, he was writhing in pain. Fatso, as he is affectionately known in his neighbourhood, said that he was in the dark as to the cause of his rare condition.

He said all he wished for now was a “speedy recovery” as he was enduring a lot of pain. “I am in deep pain. The problem began some two weeks ago when my penis erected and never ‘returned’ to its flaccid state. “The problem is that it itches and burns at the same time. The pain worsens each time I urinate.

“I am praying to the LORD for my speedy recovery,” he said. But his sexual desire has never waned since the “hot-rod condition” started, he still has his mojo! He said sometimes he feels the strong urge of having sex but the problem is that “there would be no one to satisfy my sexual affection”.

Farai said that he has been in love with Nyaradzo for two months and they have had sex several times with no problems to his Willy whatsoever. “We have been going out for the past two months. We have had sex on a many occasions at her house,” he said. His aunt, Emilia Mutamira (65) attributed Farai’s rare condition to witchcraft.

She said that Fatso could have been “locked” by his girlfriend’s former lover. Gogo Mutamira said that she discovered Farai’s ‘disease’ when they visited doctors at Chitungwiza General Hospital where she had gone with him over a separate disease. “What perplexed me was the fact that he used to constantly ask for some Vicks from me which he used to rub on his itching penis.

“While we were at the hospital, I asked the doctors to look down his pants and that is when they discovered the ‘condition’. “The doctors at the hospital failed to diagnose the disease and referred us to a specialist doctor. “The specialist doctor also failed to deal with the ‘disease’. “That was when I decided to consult some other elder members of the community who advised me to visit some traditional healers,” she said.

“We are convinced that he was bewitched. “There is nothing wrong in him finding a sexual partner but the problem he is currently facing is a thorn in the flesh. “We have been consulting traditional healers and we are yet to see any change,” she said. The man still has a constant and consistent ‘rush of blood to the head’; but definitely not the head on his shoulders!

But Nyaradzo denied that she was ‘locked’ and she was the cause of Fatso’s eternal erection. She blamed her boyfriend’s relatives for cursing him. “It is not true that his problem has been caused by me. His relatives who do not want to see him prosper in life cursed him. “I have been praying to God that he recuperates from his problem so that we can enjoy our love life,” said Nyaradzo.

She was longing for her sexual partner to recover quickly so that they could resume playing ‘adult games’! “He is the one that I was given by the Lord and I believe he will be okay soon. “His relatives know everything regarding the problem he is facing. “He had been suffering from a mental problem before and now he has become normal.

“Now they have found another way of jeopardising his life. “We believe in God and everything will be fine. One day we will get married and shame the devil,” she said. She was optimistic that Fatso will be back in action soon! Gogo Mutamira asked for help from anyone who knows how to cure Farai’s condition.

After the interview, Farai asked for a prayer from the H-Metro team. The former security guard was all smiles after the prayer saying he was looking for a job. “I will be happy if I can secure a job. I need a job to raise money for the family upkeep,” he said.

Unless someone comes to his rescue, Fatso will have to live with the ‘hard on’! Anyone who can assist Farai with his condition can send an sms to 0772 888 839 and maybe he can soon rest his throbbing busy ‘joystick which has become a rod of pain!

Please note the person with the number to which text messages must be sent is NOT the one with an eternally erect male member!  H Metro

University students in trouble over sex-tape