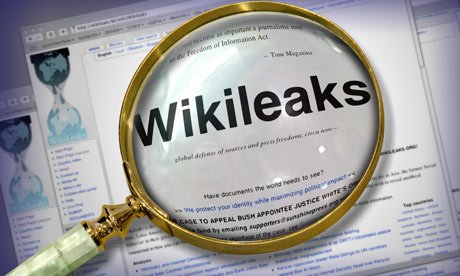 From the political-operative dept of Tech Dirt.com

While Wikileaks critics keep claiming that the site has “put lives in danger,” it’s never been able to back up those statements. Even Defense Secretary Robert Gates has admitted those claims (some of which he made early on) were not true.

So it wasn’t much of a surprise to see Wikileaks critics jump on the claims that the site had set back democracy in Zimbabwe, and potentially put one of the country’s political leaders, Morgan Tsvangirai (an opponent to long-time leader Robert Mugabe, who effectively destroyed the Zimbabwe economy), in danger.

The issue is a US diplomatic cable revealing what Tsvangirai had told the Americans about Mugabe. The country’s attorney general, who was appointed by Mugabe, quickly began an “investigation,” suggesting that Tsvangirai was guilty of treason, and Mugabe has used the incident to attack Tsvangirai, which could lead to an abandonment of the already shaky coalition government, leading Mugabe to seize back more complete control.

Assange’s family say counting on Europe to block his…

There’s no doubt that the situation in Zimbabwe is not great, but the anger towards Wikileaks is quite misplaced. The strongest article on the subject, which many people have been passing around, was published in The Guardian, by James Richardson, and blasts Wikileaks and Julian Assange for all the “damage” done in Zimbabwe.

The only problem? It wasn’t Wikileaks who originally published that cable. It was The Guardian itself, who not only published the document prior to Wikileaks, but also admits that it, not Wikileaks or Assange, chose which cables to publish and when.

It did alert Wikileaks to what it was going to publish, but the release and publication of this document was done by The Guardian — the very same publication that Richardson then used to slam Wikileaks for supposedly being the one to create the problems in Zimbabwe. Oops.

Of course, Richardson is not a reporter. He’s a well-connected political operative in the US, with ties to politicians who have been attacking Wikileaks. He ran online communications for the RNC during John McCain’s presidential campaign. So it’s pretty clear that there are ulterior motives in bashing Wikileaks, but it’s quite ironic that he chose The Guardian as his publication of choice to do so, since they’re actually the ones that broke the particular story.

Will Richardson now write a similar piece suggesting The Guardian has blood on its hands?

Even more to the point is an analysis by Charles Homans, at Foreign Policy magazine, who notes that Mugabe has had it in for Tsvangirai for years anyway — and that “Tsvangirai has been variously arrested, beaten, tortured, thrown from a 10th-floor window, and involved in a suspicious collision with a truck that claimed his wife’s life” in just the last decade or so.

The idea that this one leak is what really created problems in Zimbabwe is laughable. Mugabe has been plotting against this guy for ages, and would use any possible excuse to attack him again. The problem here is not Wikileaks.

It’s not The Guardian. It’s an unstable country with a man in Robert Mugabe who likes to crush any political opposition. To try to pin that all on Wikileaks is beyond misleading and desperate. It’s just plain deceitful. Tech Dirt.com