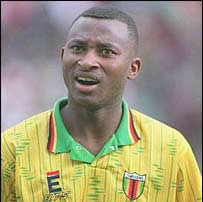 Former Zimbabwe national team striker and Captain Peter Ndlovu has snubbed an offer to join Harare giants Dynamos and instead opted join his brother Madinda Ndlovu who is the Technical Director at Black Mambas.

Under the complex deal Peter was signed by Division One side Highfield United, who immediately loaned him to Mambas for an undisclosed amount and period. Meanwhile DeMbare suffered a triple blow as two of their key players Washington Arubi and Benjamin Marere jumped ship to also join Mambas.

There was feverish speculation after Dynamos made a shock bid to lure the 37 year old Ndlovu out of retirement. His being a former Highlanders legend made the bid audacious given the two teams are bitter rivals. But instead the flying elephant has opted to play for the police team sponsored by Twalumba Holdings, who also bought Division One side Highfield United.

Peter said, “I will give my best in football; age is nothing but a number, look at Roger Milla. He played a little part in the qualifiers for the World Cup but was called up because he was an inspiration and a leader in the Cameroon team.

“I am not trying to build my name, I have done that. I am paying back to the youngsters out there because I can also learn something from them. Some of these things they do these days, I can’t even do them, so I will also learn from them.

“There are youngsters that are willing to learn and with the knowledge that I have, I believe I will be able to inspire some youngsters to greater heights and make other players, especially the youngsters, fulfil their dreams and greatness in football.”

Consistency pays off for Washington Arubi