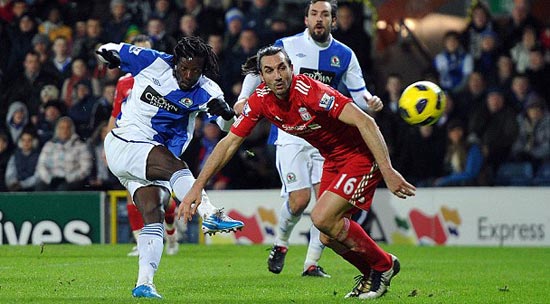 Liverpool manager Roy Hodgson’s job was hanging by the proverbial thread after Zimbabwe international and Blackburn Rovers striker Benjani Mwaruwari rose from the dead to score two goals for his new team.

Nicknamed ‘The Undertaker’ by his legion of fans Benjani has seen his appearances in the English top flight restricted by injuries. But on Wednesday evening he scored two of Rovers three goals to leave Roy Hodgson’s reign in the Anfield hot-seat hanging in the balance.

Benjani showed at Portsmouth what he is capable of but spells at Manchester City who bought him and Sunderland where he went out on loan proved less than successful as he spent more time on the bench than on the pitch. Even at his new team Blackburn his appearances have mainly been from the bench.

Gerrard tells Nakamba to fight for a place in his Aston…

Caretaker Blackburn Rovers coach Steve Kean made a leap of faith in starting with Benjani and he was to be rewarded with two goals either side of the interval. Sweden’s Martin Olsson scored the first goal. Steven Gerrard pulled a goal back for the reds before missing a second half penalty.

Meanwhile Nehanda Radio.com understands the Liverpool owners are weighing up whether to sack manager Roy Hodgson following the 3-1 defeat at Blackburn. At the time of publication no decision had yet been taken. In November 1998 Hodgson then manager at Rovers lost 2-0 to Southampton on the same ground and lost his job. Those who saw him leave say he was driven away in tears.

Gerrard must give ‘outstanding’ Nakamba a ‘lifeline after huge…