In this series SW Radio Africa journalist Alex Bell examines the voluntary return packages offered to Zimbabweans living in the UK and questions whether the packages are making it harder for asylum seekers to remain in the UK.

Alex Bell: Hallo and welcome to Diaspora Diaries with me Alex Bell. Over the next two programmes I will be re-examining the voluntary return packages offered to Zimbabweans living in the UK and question whether the packages are making it harder for asylum seekers in the UK to remain in the country.

An increasing number of Zimbabweans in the country are choosing to take the voluntary packages offered by the International Organisation for Migration. Tonight I get the opinions of some Zimbabweans in the UK and ask what their concerns are. Next week the IOM will respond to these concerns.

Now the IOM last week gave Zimbabweans in the UK a chance to question some returnees who took the IOM packages to return home to Zimbabwe. Noble Sibanda from the UK’s United Network of Detained Zimbabweans was there and I caught up with him and asked what he thought of the IOM packages.

Interview: US Ambassador to Zimbabwe

The Truth about Targeted Sanctions

Noble Sibanda: Well the first thing I can say is it’s a good thing that there is something positive out there to assist people to move from one place to another or one country to another, especially as returnees. 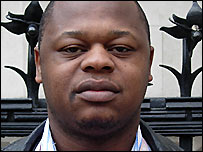 In the case of Zimbabwe, obviously there’s a lot of issues that need to be considered before someone can make a decision on a programme like the one IOM is offering. In a nutshell, the programme is not so bad depending on where you are going. IOM has tried to put a lot of systems within the help itself.

For example they are discreet in terms of getting you documents and trying to help you, you don’t have to divulge a lot of information for you to start getting on the programme. They help you get your documents from the embassies, they help move you from one place to another, to the airport using all means of transport including taxis which is quite good.

They also consider that there are people with medical problems and they’ve made available services and facilities to help those including escorted by doctors to the destination which is quite good and they are offering materials like business information, business opportunities newsletters from the destined country which is also very good and the cash incentive that they give you at the airport, at least when you arrive you have something in your hands.

So I think in terms of that the programme is something worthwhile for different situations.

AB: You have mentioned of course that there are however some shortfalls especially as Zimbabweans and given the particular Zimbabwe situation. What are your concerns?

NS: Well I have a lot of concerns. First of all is the security issue. We were at the meeting and there were a lot of questions raised that was IOM able to know when these people arrive or after a while, how they were doing but apparently IOM only knows about these people for a short time like four to six months and they don’t even know if they are doing well after that.

As we know in Zimbabwe, a lot of things are of concern like the collapse of infrastructures, there’s always no electricity and theft, theft has gone up lately because maybe of the US dollar and there is a lot of corruption, back door assistance so in terms of trying to go and set up something there it’s of great concern – I mean – where do you start? Are you going to prosper?

Even IOM could not give those confirmations because it will be interesting, last year we had a similar meeting and we wanted to know the people who had embarked on this programme how they were doing to date. And it was unfortunate that even the organisation doesn’t know if those people are still in business or if they have lost all their investments.

AB: Now the IOM when we spoke last week, they were very, very particular that it’s not up to them to be providing security and everything for returnees. Do you think this is something that should however be taken into account when offering these packages?

NS: Well it should be because there’s nothing wrong with the package itself like I’ve said, it’s a good package depending on the destination but the security issue is very important because that’s what also sells the programme.

If people know that at least there are people who have embarked on this and they’re still in business a year later, two years later because IOM has been doing this for a very long time but they cannot give that guarantee or not even a guarantee as such, but they cannot, they don’t even have that information to say OK this programme is really good, it is working.

So there is that element of not knowing whether this programme can work. Like I’ve just described, the many issues that are there in Zimbabwe that some of the returnees were talking about like back door and all these other issues that they’re going through every day. So it becomes problematic to even, for us, people in the UK or leaders in the UK to recommend a package which is half done to the masses.

AB: What do you think the kind of effect then is on current Zimbabwean asylum seekers and their whole process in trying to get asylum when these kind of packages are around? Do you think it actually makes it harder for them to be getting asylum in the country?

Like when we were at the meeting, most of the people that have taken the programmes were either students who had overstayed and then tried to get asylum without knowing what asylum really is and they’ve found it frustrating and then later on jump on the programme. So it’s actually affecting other people who perhaps have security concerns in terms of returning back to their homeland and it’s quite a problem at the moment.

AB: I know there was one of the concerns that you yourself raised was that there were people at different border agency offices who were using the packages, almost forcing the packages on people instead of considering their applications. Is this a problem at many offices?

NS: Well it is. The fact that this programme is there they would rather like have people take on the programmes so if they can force it on the people or threaten because some of them have like intimidated people to take on these kind of programmes but remember a lot of people are not really aware of how the border agency works so when they come and say OK you take this or we will deport you, some will just think OK maybe that’s what’s going to happen but really they have no right to do that.

It’s either they deal with your case, if they are not going to be able to help you there then they should just turn you down. We are worried that the border agency should not really get involved because it actually spoils even the image of the IOM which is a separate entity and so they are actually abusing and trying to rely on that but remember it is also about the statistics.

AB: So if you could change something would it then include not having the involvement of the border agency?

NS: Yah definitely. I’ve recommended that to the people who were there from the border agency and it was a good thing. One chap from the border agency said look the point that you’ve raised here, I take it deeply, so which was refreshing. Whatever they do with that but I mean they realise that yes it actually distorts the whole mission because IOM should be really viewed from the point of an independent international organisation which has nothing to do with this country whatsoever and that’s very important for the programme to really work.

AB: Well that was Noble Sibanda from the United Network of Detained Zimbabweans.

Interview: US Ambassador to Zimbabwe

The Truth about Targeted Sanctions

deportation of zimbabweans in south africaInternational Organisation for Migration

‘Zimbabwe takes its land back from who?’