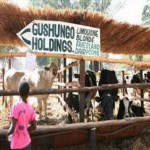 Human rights campaigners will be infuriated to learn that Nestle Zimbabwe was actually forced into buying milk from First Lady Grace Mugabe’s Gushungo Dairy Estate, after all.

Last week Nestle said it was suspending its local operation in Zimbabwe because it could not guarantee the safety of its workers. This after threats from war veterans and Zanu PF youths livid at the company’s decision to stop buying milk from Grace Mugabe.

Zimbabwe’s government responded by asking food giant Nestle to resume operations in the country, saying it guaranteed the operations of the firm and its staff from interference, state media reported on Friday.

Prime Minister Morgan Tsvangirai even branded the closure of Nestle’s plant an ‘over-reaction’ by the company and urged them to reconsider. Tsvangirai is said to have assigned Industry and Trade Minister Welshman Ncube to resolve the issue.

But a statement from Welshman Ncube has now given the deal away. Commenting on the discussions that subsequently took place and the resultant deal Ncube tellingly said;

“As a result of those consultations, the parties have collectively reached an understanding to work together in ensuring that milk produced at Gushungo Dairies is absorbed by the local dairy processors.”

Nehanda Radio can now reveal that Nestle will continue to buy milk from Grace Mugabe but not directly. To get around the negative publicity Grace Mugabe will sell her milk to Dairiboard Zimbabwe, who will in turn sell to Nestle.

Campaigners attacked Nestle for sponsoring repression by buying milk from Grace Mugabe who seized the farm from the previous owner via a campaign of violence and intimidation. The former white owner was eventually forced to sell for a knock down price.