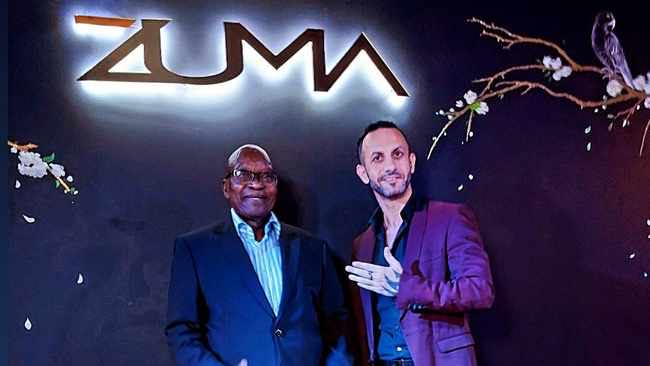 Durban businessman and restaurateur David Manal has cleared the confusion about the newly opened Zuma restaurant at the Pearls of uMhlanga, north of Durban.

Manal said former president Jacob Zuma had nothing to do with the restaurant, but had been invited as a guest to its official opening.

This comes after reports on social media alleged Zuma had opened a new restaurant, called “Zuma”.

The Saudi businessman, who relocated to South Africa in 2000 and owns multiple restaurants in Durban, said he was the owner of the restaurant where Zuma and his former financial adviser Schabir Shaik were spotted enjoying themselves.

Zuma vs Ramaphosa: Legal battle set for January 10 in High…

Zuma Foundation insists it has a legit certificate to…

Naming his restaurant Zuma was a marketing strategy designed to attract public figures as the eatery caters for celebrities.

“Zuma restaurant is a well known brand internationally, there are more than 11 such restaurants around the world, and Zuma is a trademark. South African ‘Zuma’ is solely owned and trademarked by myself. ‘Zuma’ restaurant is a contemporary infusion, Mediterranean and Asian (Mediterranean). We had the honour to have our former president to be part of our opening,” said Manal. The opening of the Zuma restaurant was an expansion to the existing luxurious Cafe La Plage, he said, adding that it was a great pleasure to host the Zuma family and friends at the opening.

R75m worth of cocaine hidden in oranges, shipped to the UK from South Africa

Zuma Foundation insists it has a legit certificate to prosecute Ramaphosa