Photos have been released of 62 people allegedly being held hostage in Nigeria after a brazen attack by gunmen on a high-speed train last month.

It is not clear when the pictures, which surfaced on social media on Tuesday showing the captives divided into four groups, were taken.

Families of some of those missing after the attack told the BBC they recognised their relatives amongst the hostages.

They give the first indication of how many people are being held.

“I feel such emotion. I cried a lot when I saw the pictures,” someone whose brother and sister-in-law are among the hostages told the BBC. He asked not to be identified and said it was a traumatising time for the family.

Gunmen mined the vital rail link between the capital, Abuja, and the northern city of Kaduna on the evening of 28 March, forcing the train carrying 362 passengers to stop.

At least nine passengers died during the attack and some 168 people were reported missing afterwards by the state rail company.

But it has never been clear whether all of them were kidnapped or if some had managed to return home without telling the authorities.

Although the photos have not been independently verified, they provide the first indication of how many people may have been kidnapped in the attack.

Earlier, two proof-of-life videos were released – one showed a bank executive, flanked by armed men in fatigues. He has subsequently been freed.

A second video, which sources suggest was recorded not long after the kidnapping, showed hostages in the bush with armed men in the background – some giving their names and other details.

In the four photos circulating this week, the captives appear seated on cloths with other sheets draped in the background. They are divided into groups of men and women – with 39 men in three photos and 18 women and five children in another.

Another man who recognised his brother in one of the photos told the BBC his sibling had “lost so much weight and his skin has darkened”.

Although this suggested the hostages were not being well fed, he said the family was relieved to see him alive.

“My brother’s little children always ask of their father, but we only tell them he will be back soon.”

The authorities say a faction of the Boko Haram jihadist group teamed up with Nigeria’s notorious criminal kidnapping gangs to attack the train.

The Islamist insurgents tend to operate in the north-east, with the sophisticated kidnappers, known locally as bandits, operating mainly across the north-west.

When the banker was free about 10 days after the train attack, the kidnappers said in a video that they had taken pity on him because of his age, but there have been reports that a ransom was paid.

However, in the video one gunmen told the government it was not about ransoms: “What we need is not your money. You know our demands.”

Analysts suggest they might be seeking a prisoner exchange for their colleagues arrested by the security forces.

Relatives of some of the captives have expressed their despair over the situation, telling the BBC officials have not even contacted them directly and all their news comes via the media.

Last week, the president lambasted his security forces, ordering them to put more effort into finding the abductees.

Kidnapping for ransom has become commonplace across Nigeria. Last week, a report by security research and intelligence firm Beacon Consulting Ltd said that in the first three months of this year, more than 3,500 people had been killed and many more kidnapped by armed groups in Nigeria.

The Abuja-Kaduna highway is one of the most dangerous roads in the country, and had pushed commuters on to the railway, which opened in 2016.

It has been announced that military aircraft will escort the trains once repair work on the 190km (120-mile) track is completed. It is not known exactly when services will resume. 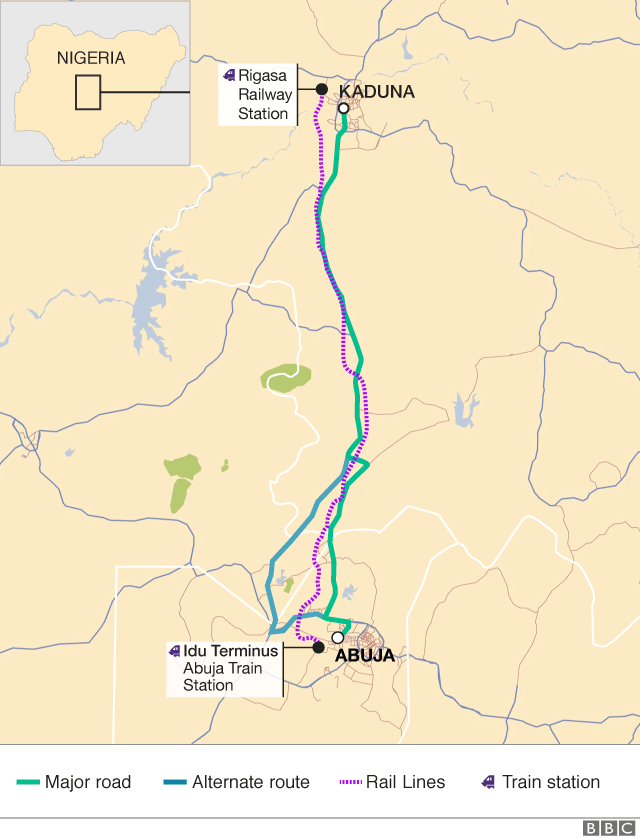