A flood survivor has told the BBC that she is homeless and hurt after one of South Africa’s worst storms hit KwaZulu-Natal province.

“We’re traumatised, we can’t even eat. For the whole day I didn’t eat because I don’t know what to do,” Boniswa Shangase said.

A state of disaster has been called in the region, after months worth of rain fell in just one day in some areas.

More than 300 people have died, but she survived by jumping out of a window.

Cyril Ramaphosa accused of kidnap and bribery by former spy…

Flood death toll rises to 443 as deluge eases in South…

“I used the window to get out of the house, you can see I’ve got bruises here,” the 40-year-old restaurant cashier said.

She put everything into making her house a home, and now, it is gone.

She built it 12 years ago and lived there with her two children, but at 22:00 on Monday night everything changed.

Mudslides caused by the excessive rain swept her property downhill in the township of Ntuzuma, in northern Durban.

“Now I’m homeless,” she said. “We can’t live here any more,” nor can she imagine her life staying in a community hall.

Like most people living in informal settlements, she did not have any insurance.

Ms Shangase is not the only one still reeling from the impact of these historic floods.

It is thought more than 6,000 homes have been damaged, according to the AFP news agency.

One man nearly broke down as he explained how he managed to make it out alive, but his child did not. Speechless, he dropped his head and struggled to get his words out, against a backdrop of rubble and destroyed properties.

President Cyril Ramaphosa, who visited affected areas on Wednesday, says climate change is to blame, but some communities disagree. They say poor drainage and building standards have increased the scale of the disaster.

Durban Mayor Mxolisi Kaunda denied that inadequate drainage was to blame, saying the scale of the flood was unexpected.

Informal settlements like some of those in Ntuzuma are built on a slope with limited foundations and flimsy dwellings.

The scale of the damage to infrastructure has been vast with electricity and water supplies hit, although authorities say some of these services have now been restored.

Rescue missions are being undertaken, with some residents evacuated to places of safety, but large parts of the KwaZulu-Natal province remain submerged including highways and roads, so some communities remain totally cut off.

The coastal city of Durban is where most of the images of cars submerged in water and flattened properties have come from.

The city has also witnessed several outbreaks of looting, with 12 people arrested on Wednesday night after two retail outlets were targeted, local media report. According to the IOL news site, the suspects took groceries and appliances.

Containers stored in the dockyards of one of the largest ports in Africa have been totally washed away. The state transport company says it has suspended shipping until further notice, which will certainly affect trade across southern Africa.

There are accounts of destruction to churches as well as more than 240 schools damaged in the province.

Although the floods are now subsiding and some communities recovering, more rains are forecast over the Easter weekend and the province remains on high alert. 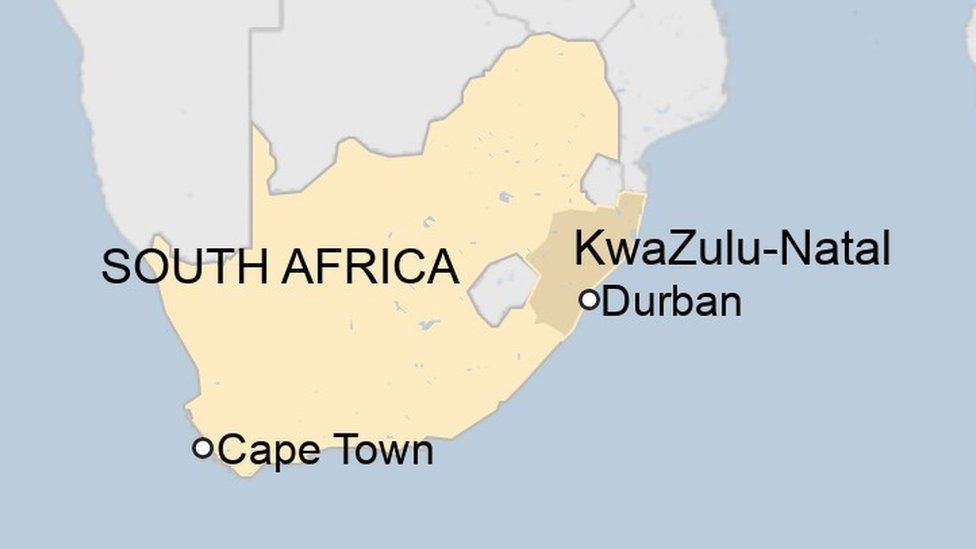