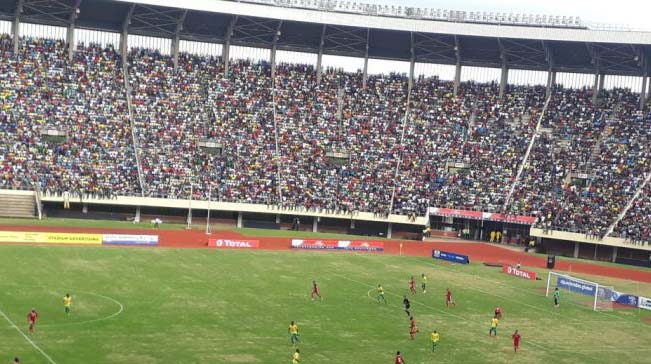 ZIFA’S audacious bid to have fans allowed back for the Warriors 2022 World Cup qualifying showdown against South Africa hit a snag yesterday when the Confederation of African Football (CAF) turned down their request.

The association had hoped to spice up the blockbuster game by seeking to have at least 10 000 fans allowed into the National Sports Stadium for the encounter, which will mark the beginning the Warriors’ qualifiers for the World Cup showpiece set for Qatar next year.

Yesterday’s decision by CAF completed a terrible week for both ZIFA and Warriors coach Zdravko “Loga’’ Logarusic, who is unable to call on the services of England-based players, including US-based centre-back Teenage Hadebe.

Star midfielder Marvelous Nakamba and his colleagues who play in the United Kingdom are unable to travel after the English clubs resolved to bar players from travelling to destinations on the country’s coronavirus red-list.

“Our request to let in 10 000 supporters during the FIFA World Cup 2022 qualifier between Zimbabwe and South Africa has been turned down by the Confederation of African Football (CAF).

“CAF noted that the ideal scenario during the pandemic is to play matches behind closed doors, but exceptions are being made to allow spectators into the stadium, where and when the stadium in question meets required standards,’’ Gwesela said.

Part of the communication from CAF to ZIFA read: “CAF analysed and assessed your request from a medical, stadium requirements compliance, and safety and security perspective in your venue. “Accordingly, a decision has been taken not to allow the presence of spectators in the aforementioned match.”

Gwesela acknowledged that the National Sports Stadium is only provisionally certified by CAF to host international matches but is yet to meet the continental body’s requirements, as it has fallen behind expected standards.

“Since the resumption of international football late in 2020, National Sports Stadium has been hosting senior men’s international games on provisional basis.

“The stadium had been barred in 2020 just before our Africa Cup of Nations qualifier against Algeria. “The absence of bucket seats and electronic access controls are among issues that CAF has continuously urged Zimbabwe to address to get unrestricted approval to host matches.” ZIFA exhorted Government to quicken renovations at the stadium.

“Our sincere hope is that the situation will improve soon so that supporters can be allowed into the stadium when we host Ghana in October,’’ added Gwesela.

While CAF were denying ZIFA a chance to allow fans back for the massive encounter that could set the tone for the Warriors campaign, coach Loga and his lieutenants – Lloyd Chitembwe, Tonderai Ndiraya and team manager Wellington Mpandare – were meeting in the capital to revise their squad.

But as has now seemingly become the norm with their squad selections, the side they came up with yesterday was not short of controversy.

While Loga’s plans might have been scuttled by Covid-19 restrictions, which mean the likes of Tendayi Darikwa, Jordan Zemura and Hadebe cannot make it for the match, his Plan B is far from convinving.

The gaffer, with just one win in 12 games in his Warriors tenure, came up with a 26-man side that will be led skipper Knowledge Musona, Olympic Lyon forward Tino Kadewere and Kaizer Chiefs talisman Khama Billiat.

However, 12 of the 26 players named in yesterday’s squad have largely been inactive.

For example, Alec Mudimu has just reportedly signed for some obscure club.

The other players who, just like local Premiership players, have not seen any game time for quite some time are Talbert Shumba, Kevin Moyo, William Stima, Blessing Sarupinda, Perfect Chikwende, Butholezwe Ncube, Ishmael Wadi, Farai Madhanaga, Silas Songani and Orlando Pirates’ Terrence Dzvukamanja, who has just recovered from injury.

Jona Fabisch might have shown his handlers that he has the potential but to pluck the young player from a fifth-tier German league and straight into a World Cup squad is an ill-advised decision, which raises serious questions.

In fact, the lack of clarity on what yardstick Loga and his assistants are using appears to lend credence to growing suspicions the Warriors have fallen prey to cartels who are forcing their players into the squad to market them.

The national team currently does not have minimum standards for players to be considered for the squad.

That Loga and his crew have constantly named unemployed footballers in the national team shows that being active, in form and having competitive match fitness counts for nothing.

And, sadly, for local players, regardless of one’s ability or talent, the rule book has been changed for them and they are overlooked “because they were not playing league football’’.

This, however, does not seem to apply to foreign players.

ZIFA’s failure to wisely use the US$1,5 million received from FIFA for the resumption of football in the Covid-19 era has also returned to haunt them, as now, more than ever, they would have depended on local players.

The association also failed to ensure that local players who had shown potential to feature for the Warriors, especially during the Chibuku Super Cup, were put on a special training programme even after the tournament was suspended.

But football being a crazy game that it is, Loga could yet ride on his luck and lead the Warriors to victory over Bafana Bafana on Friday.

However, questions over transparency in squad selection continue to be raised by many, including two of the Warriors former defenders, George Mbwando and Dumisani Mpofu.

“The rumours that have been doing rounds about players paying money to be in the team may be true because we have been hearing that for a long time now.

“The problem is there is no transparency in anything, so nothing will come out if there is no order,” Mbwando recently told The Sunday Mail Sport.

Mpofu said he believes Loga is being influenced to select certain players.

“I have one big question: Who exactly is selecting our national team players? Is it the team manager, agents or the coach?

“Because, as far as I know, the coach is not well-versed with most of the players.

“Most of the time the coach is away and he is yet to know most of the players. So who exactly is making these call-ups?

“The national team is not for trialists, nor is it a platform for auditions,” he said.