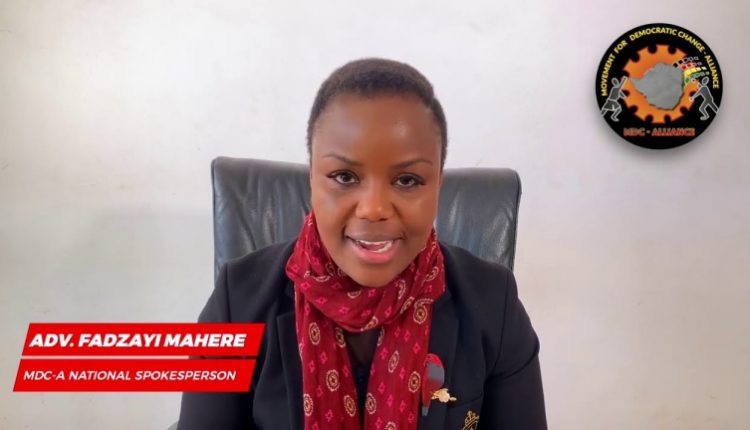 The main opposition MDC Alliance has called for the protection of the Auditor-General Mildred Chiri amid revelations that she was threatened by some companies she had reported as corrupt in her previous audit reports.

Giving oral evidence to the Public Accounts Parliamentary Portfolio committee on Monday, Chiri said that as a result of the threats, her office resorted to not naming the companies involved in underhand dealings in the recently released 2019 report to avoid lawsuits.

“Regarding the naming of companies with issues in the annual report, the approach of naming suppliers and companies was not done in order to manage the risk associated with potential litigation. There have been comebacks with some suppliers on some of our findings in the past.

“Those that have approached us in the past were saying naming them in our reports had resulted in them losing business. They think just mentioning their names taints them as this takes away their future businesses.

“Some would sort of like threaten and when we checked with our secretariat. They warned us that we would face a litany of lawsuits if we continued with naming companies,” she said.

In an interview with Nehanda Radio, MDC Alliance national spokesperson Fadzayi Mahere said the Auditor-General’s function was provided for by the Constitution hence she should be allowed to do her work freely.

“As the MDC Alliance, we are extremely concerned that the Auditor-General is being threatened in her work as she brings to light strong issues around maladministration and corruption,” she said.

“The Auditor-General is a function of the Constitution so she must be allowed to do her work without fear and without favour.”

Mahere said that it was the duty of the Zimbabwe Anti-Corruption Commission (ZACC) and police to ensure that the Auditor-General is protected.

“At this point what we expected to see is the Zimbabwe Anti-Corruption Commission ensuring that investigations are carried out pursuant to a report but most fundamentally the police and ZACC must ensure that the Auditor-General’s is protected so that she she can hold to account all those who are acting outside the acceptable parameters of transparency and openness,” Mahere said.

She added that the MDC Alliance was also concerned that the Zimbabwe Electoral Commission (ZEC) did not disclose its 2018 and 2019 financial accounts for audit to the Auditor-General.

“We are also extremely concerned by the fact that the Zimbabwe Electoral Commission which is meant to be a Constitutional commission won’t open itself up to scrutiny by the office of the Auditor-General who is designed in terms of our Constitution to ensure accountability.

“This confirms what we have said over and over again. The scourge that is at the root of the socio-economic crisis we have in Zimbabwe is corruption. Corruption is killing us. There has been no attempt whatsoever by the regime to deal with it,” she said further.

Meanwhile the MDC Alliance called for radical transparency in Zimbabwe, a public audit of all state companies and other companies who failed to supply or account for the records of transactions that involve public money.

“This has to be brought to light and following that ZACC has to act on it. It is a basic minimum demand that we have,” Mahere said. Nehanda Radio

Sexualisation of Female Politicians – The unacceptable attacks against Mahere and…