‘Why I threw my baby to complete strangers’ 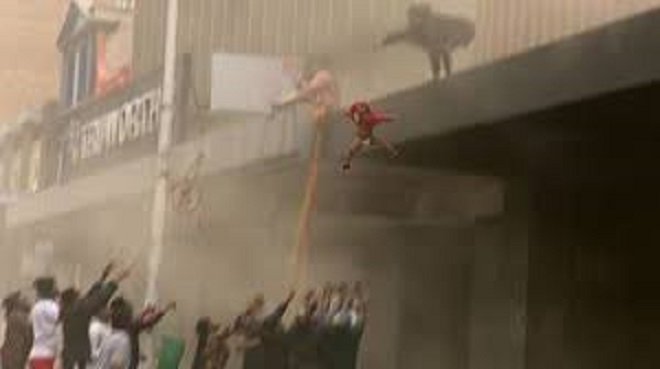 The mother who threw her baby to a crowd from a smoke-filled building in the South African coastal city of Durban has told the BBC of her gratitude to those who saved her daughter.

“All I could do was trust complete strangers,” Naledi Manyoni said, adding that she and her daughter Melokuhle were now doing well after their ordeal.

My team filmed her throwing Melokuhle when we were on a street in Durban’s city centre on Tuesday afternoon after it had been hit by looters.

Hunt for missing as deadly floods cause havoc in South…

Those raiding ground-floor shops had started a fire in the building in which Ms Manyoni had been visiting her partner.

They were staying in the 16th floor of the apartment block when they noticed smoke rising.

The lift was not working because of the fire, so Ms Manyoni frantically ran down the stairs with her baby.

However, she was unable to get to the ground floor as the area was blocked.

She says she managed to squeeze through to a balcony area on the second floor where she appealed to passers-by for help.

“All I could think was to make sure my baby lived,” she said.

Firefighters arrived at the scene about 20 minutes after people in the crowd had started rescuing others residents with ladders – which is how Ms Manyoni was reunited with her daughter.

She told the BBC they managed to return to the flat at about midnight.

Koffi Olomide and Rayvanny land in Harare for collabos with Roki

Hunt for missing as deadly floods cause havoc in South Africa