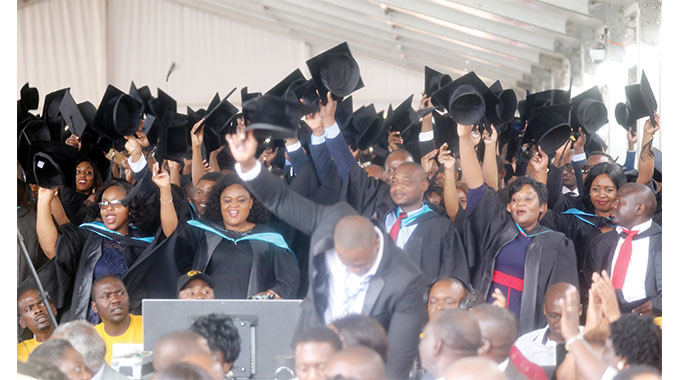 The recent announcement of tuition fee increases at all state universities by the Government has caused an uproar among tertiary learners across the country.

In his announcement of the new fees structure, Professor Amon Murwira, Minister of Higher and Tertiary Education, Innovation, Science and Technology Development said:

“The current fees structures must be maintained, citing affordability, reasonability and sustainability as the three factors that determine fee hikes.”

However, university nature in Zimbabwe has drastically changed over the years. Back in the early 1900s when the University of Zimbabwe (UZ) was the only existing tertiary institution in the country, tuition was free of charge. Those who enrolled in the university were offered grants, which covered all their expenses.

Zimbabwe defends decision to abstain from UN vote on Ukraine

Sneak peek into Mnangagwa book buyers who coughed up…

The economic challenges worsened the situation. Universities have had to raise tuition fees parallel to the overall national economic performance.

Thus, fees hikes have been justifiable before.

At the moment, the country is underperforming economically and the presence of Covid-19 has further worsened the situation.

The Covid-19 period has brought boundless hardships to the whole nation. Many companies have closed down, resulting in scores losing their jobs. Some, especially informal traders, have lost their sources of income. Those with businesses that survived are at the moment struggling to remain afloat.

These are mostly the people who are parents or guardians of university students and others are the learners themselves, who did not expect fees hikes anytime soon.

Students from different universities have voiced their concern over this decision, which they think is unfair and unjust. The tuition fees are now at an average of Z$25 000 for undergraduate students.

Many students are already crying foul saying that they barely afforded the previous fees, which cost around Z$10 000.

“It is not fair to raise fees to such amounts because even civil servants are not given that kind of salary,” she said.

She said many students had been deprived of the opportunity to advance their education because it is no longer affordable.

“In Zimbabwe we prioritise education. If the fees keep rising and yet we do not have funds to cater for those increases, who will go to school?” Miss Moyo lamented.

She admitted that universities are not entirely wrong for raising fees because that is the only way they can remain functional. However, they were supposed to provide viable solutions for the students over this situation, she said.

“The university has us as its debtors,” she said.

“We are their source of funds to their expenses. It is okay to raise fees but it should be reasonable. Let us have a standard price and a maximum price. If they unreasonably raise the fees people will not go to university and they also remain broke. But if they charge fairly, I believe half a loaf is better than nothing.”

Her argument was that universities must consider the current situation in the country and base their decisions on that.

“I am greatly affected because my grandfather is the one who pays my fees through selling cattle. At the moment there are no buyers because of Covid-19 and the poor economy. Unless the university says we will take you with your cattle equivalent to your tuition fees then there’s no school for me,” she said.

Miss Moyo suggested subsidising tertiary learning as a solution to the problem. She also suggested that rentals for students in these institutions should be reduced.

Student loans, she said, would go a long way in assisting students to finish their studies.

“Student loans do assist but you can take one, then after you graduate there is no employment and yet the loan needs to be repaid,” Miss Moyo added.

An undergraduate student at the National University of Science and Technology (Nust) who preferred anonymity said he had already been affected as their fees is already effective.

“I am greatly affected by the fees hikes because now I have to use attachment pay to top up the fees and ask for contributions from my sisters. It will take me over three months to finish all payments.

“This is a problem because now it means that we have to sacrifice all our day to day needs at home to pay my fees. Education in Zimbabwe is slowly becoming for rich people because if the common folk is struggling to buy mealie meal, what more university fees, ” he said.

He suggested subsidising tertiary education which would help in meeting the students halfway in payments.

Tertiary learners hope that Government would go beyond offering scholarships to students and fund the institutions themselves.

Miss Emmaculate Moyo, an Insurance and Risk Management student at MSU said that the fee hikes will have far-reaching effects.

“The effect of this thing is more psychological and mental now. There is nothing I do now other than thinking of how my parents will manage to pay the required fees, or whether I will have to defer my studies. I am failing to concentrate on my classes as it is,” she said.

A student at the UZ, Miss Natasha Hanson who is currently doing her first year said the situation is devastating.

“I was happy to finally get an opportunity to enroll at a university like UZ but the happiness has been short-lived. With the current fees hikes I am now thinking of my mother who has to miraculously raise the required amounts, being a civil servant on top of that,” she said.

Miss Hanson said Government must first manage its resources effectively so that tertiary fees would be reduced again. This will create a better future for students who are already at universities as they will be able to finish their studies. It will also provide an opportunity for those who hope to advance to tertiary education.

Tertiary students think that if Government assisted universities with funds, this will serve as a solution to this depressing situation. The Chronicle

Zimbabwe defends decision to abstain from UN vote on Ukraine

Sneak peek into Mnangagwa book buyers who coughed up US$755,700