Dozens of people are dead following an attack by Islamist militants on a town in northern Mozambique, officials say. 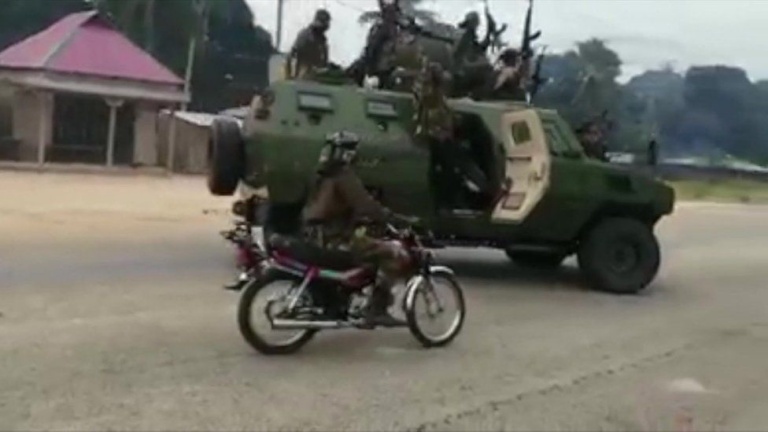 Seven people were killed trying to escape a siege on a hotel, said Omar Saranga, a spokesperson from the country’s defence department.

Militants linked to the Islamic State (IS) group are behind the conflict in the predominantly Muslim region.

Hundreds of others, both locals and foreigners, were reportedly rescued from Palma after the attack.

Witnesses have described hiding out while waiting to be rescued by boat, on a beach strewn with headless bodies.

Marine traffic websites showed a string of vessels around the town, and the port of Pemba to the south, as people tried to escape by any means – cargo vessels, passenger ships, tugs and recreational boats.

Palma is near a major gas project run by the French energy giant Total, and more than 100 workers and civilians took refuge in the town’s Amarula Palma hotel.

“Last Wednesday, a group of terrorists sneaked into… Palma and launched actions that resulted in the cowardly murder of dozens of defenceless people,” defence ministry spokesman Mr Saranga told a news conference on Sunday.

What do we know of the rescue?
One contractor told the BBC many who escaped the hotel via convoy hid at the beach overnight on Friday and were evacuated by boat on Saturday morning.

He said more people were delivered to safety after him, and that the boats would be returning to rescue more still.

He said civilians living and working in the area appeared to be co-ordinating the rescue effort.

“Local suppliers and companies, these guys were heroes of the entire operation. In the wee hours they managed to co-ordinate and reach out to the evacuees on the beach and got them on to boats and got them into safety.”

“Where the hell was the support from big companies, from countries?” he asked.

One South African man is known to be among the dead.

Her husband, Gregory, managed to make it out of Palma – though she told AFP that he had to carry the body of their dead son until he was rescued. Her other son was also able to escape.

But once they had fled, Ms Knox said they had “no army to protect them… it was a matter of, ‘run for your life'”.

“This could have been avoided,” she added. “My son could still be alive today.”

One source close to the rescue operation told AFP news agency that a boat with about 1,400 people on board had arrived in the port town of Pemba, which is about 250km (155 miles) south of Palma, on Sunday afternoon.

What’s the situation now in Palma?
The exact number of casualties in Palma, a town of about 75,000 people in Cabo Delgado province, is unclear. Many are still unaccounted for.

The town and beaches are strewn with bodies “with heads and without”, according to Col Lionel Dyke, whose private security firm, Dyck Advisory Group, is contracted by the Mozambique police in the area.

The armed group is reported to have taken control of Palma, but those claims are hard to verify amid a communications blackout.

Hundreds of people fled the fighting, running into forests, mangroves or nearby villages.

Some tried to escape the hotel in a convoy of vehicles on Friday, aiming for a nearby beach. At least 20 people were reportedly flown to safety in helicopters, but others were ambushed outside the hotel.

There are unconfirmed reports of British citizens being caught up in the hotel siege.

One company, RA International, told the BBC that it had yet to locate a British national who was at the Amarula Hotel during the attack. The company says it last heard from its employee on Friday afternoon. Seven of its local staff have made it to safety.

The UK parliamentary under-secretary of state for Africa, James Duddridge, tweeted that the government was contacting Britons in the area to provide support, adding: “The UK wholeheartedly condemns the appalling violence in Cabo Delgado. It must stop. We stand with the people of Mozambique against terror.” BBC News