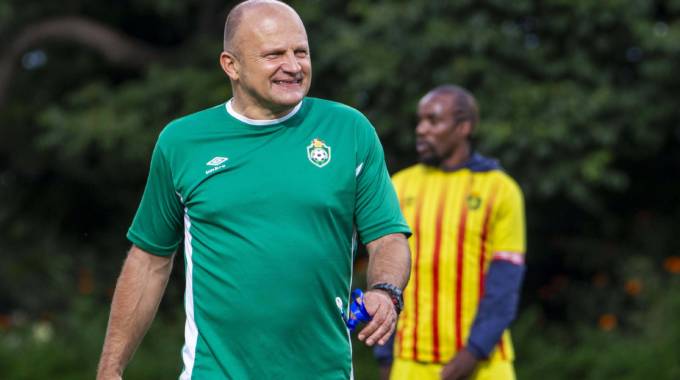 The 55-year-old Croat is fretting over fielding his best available stars who are on the verge of suspension, having accumulated two yellow cards so far and risk exposing them to more bookings.

Precedence has shown that Confederation of African Football’s suspensions from the qualifiers are carried over to the tournament and Loga is cautious about having to miss some players for the Warriors opener at the Nations Cup finals in Cameroon in January next year.

The Warriors’ 1-0 triumph over Botswana, coupled with Zambia’s 3-3 home draw against Algeria, meant that it was Loga’s men who secured the second qualifying spot from Group H.

Europe-based pros back in Warriors squad for World Cup

African champions Algeria had already sealed qualification with two games to spare leaving the trio of Zimbabwe, Botswana and basement team Zambia, who were separated by a point at each rung, to fight for qualification.

Zimbabwe will now have to go into battle without having to worry about a repeat of the 1993 heartbreak when a Kalusha Bwalya header 11 minutes from time silenced a packed National Sports Stadium and sent a rebuilding Chipolopolo through to the 1994 Nations Cup finals at the expense of the Warriors.

Tomorrow, the script will be different as it is all about pride and bragging rights in the Battle of the Zambezi derby.

Fortunately for Loga, his is a positive headache as he ponders on who to throw into the fray.

“If you play them and they receive a yellow card in tomorrow’s match, they will miss the opening game of the Africa Cup of Nations finals next year, which becomes a problem again.

“Then the other problem is that Zimbabwean people always expect you to win and they can’t accept anything except a win. You can be a King today and tomorrow you are branded an enemy if you lose,” said Loga.

As he finds himself in a somewhat Catch-22 situation, the Croat has hinted on throwing in some of the fringe players that he has always wanted to assess in match situations.

One of those key players sitting on a yellow card is skipper Knowledge Musona.

“Musona is injured and also has a yellow card. Some of the players have travelled long distances and have also played so many games in a space of a few days. It is something that you have to put on the table for a bigger picture.

“It is nice to have the best team on the field any day, but at the same time you have to see the bigger picture.

“I am not saying we have Team A, B, or C, those things do not exist. We have the Zimbabwe national football team, we have players that travelled to represent Zimbabwe and showcase their talent.

“We have some players that have played 10-15 minutes, which is not enough. We want to see if they have the capacity to be national team players. But how are we going to see that? We give them an opportunity to play,” said Loga.

The Croat said he is not afraid of taking a gamble with his selection, which he describes as having paid off in the last few matches when circumstances forced him to use players he was only meeting for the first time.

“We have Victor Kamhuka who has travelled 16 000km to come and represent Zimbabwe, we also have Evans Rusike and Romario Matova.

“Last time I had a good feeling. Who knew three months ago that Perfect (Chikwende) could start in the national team and score a priceless goal?

“Who knew Prince Dube would come and with his first touch score an important goal? These are some of things that as coach I have to grapple with.

“These are some of the decisions that are not in the book, but we learn from our experiences and make the right decision at the right time.

“As coaches our job is always in the middle of the road. At times our decisions will see us being labelled geniuses but at the same time if you cross to the other side you are said to be an idiot,” Loga said.

“It’s not to say I am smart, but I use my football knowledge.

“At times you have to make decisions in a very short space of time, some which are big decisions, some of them unpopular.

“Zimbabwe players play for the national team with their heart, and I respect them for that,” said Loga. The Sunday Mail

Europe-based pros back in Warriors squad for World Cup