Wilfred Mafuka, the suspect who allegedly handed himself over to police in connection with a hit and run incident that killed late rapper Cal Vin last year, wants to be exonerated from the crime, saying he is innocent. 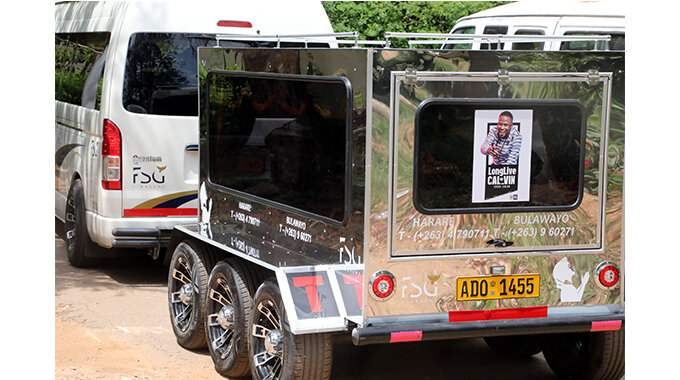 Cal Vin was run over by a car, allegedly a white Mazda Familia, just metres away from his home in Luveve 5, Bulawayo in October last year. He was in the company of his girlfriend and friends.

The alleged driver is said to have dragged his body for some metres and drove off into the night leaving Cal Vin battling for his life. The rapper died hours later upon arrival at Mpilo Central Hospital.

In the days leading up to his burial, police issued a statement through a tweet saying a suspect had handed himself in connection with Cal Vin’s hit and run incident. “On 28/10/20, police in Bulawayo arrested one suspect in connection with the fatal hit and run accident which led to the death of musician Cal Vin Nhliziyo,” read part of the statement.

In a follow up interview then by Chronicle Showbiz, national police spokesperson, Assistant Commissioner Paul Nyathi, identified the suspect as being Wilfred Mafuka. He was then let go by the police, but they indicated that Mafuka still had a case to answer.

Now through his lawyers, Mafuka has given the Zimbabwe Republic Police a 14-day ultimatum to take him to court or release his car which was impounded as part of the investigations.

Wrote Mafuka’s legal representative Matatu, Masamvu, Da Silva-Gustavo Law Chambers: “We are aware a warned cautioned statement was recorded, but to date, nothing further has happened despite our client’s various calls to your office.

To date, his vehicle is rotting at your police station. There is no word from the police regarding the fate of our client as it has been over four months now. “We request two things from the police if there is transparency: to release our client’s motor vehicle together with the VID report of DNA tests or take our client to court and let the law take its course.

“We, therefore, give you 14 working days from the date of service of this letter to your Bulawayo PHQ, failure which, we have instructions to approach the courts.”

The letter dated March 3 was addressed to the ZRP Headquarters. Mafuka’s lawyer, Bruce Masamvu said he wants his client’s name to be cleared. “These guys have everything I think that can exonerate my client, but they are holding on to it.

We have written to them, saying if my client is an accused person, please take him to court. They have CCTV footage before the incident involving Cal Vin, when my client’s car was actually damaged before that.

“They were told that my client’s alibi was at Rainbow Hotel on the day in question and I don’t know if they have investigated that. But the long and short of it is that they are now delaying saying they are waiting for the DNA tests which are to be done again because when they were taken initially, they were done by Nust and we believe they are being done at Nust again.

Also waiting on police to conclude the investigations is the late Cal Vin’s mother, Sinikiwe Luphahla who recently went to the police to seek updates on her son’s death.

“This issue is giving me sleepless nights because I don’t really know what transpired that day (when Cal Vin was hit by a car). Ever since Mgcini died, I’ve been dashing to the police so that I keep up with the investigations. I’m not a mother who gives up, if I do so, Mgcini will not be happy where he is resting,” Luphahla told our sister newspaper B-Metro last week. The Chronicle

Returning home from SA was a blessing in disguise: Gospel artiste Cheya