Villagers in parts of Hwange District, especially Chisuma and Sizinda areas, are living in fear for their lives following the discovery of four landmines within a month. 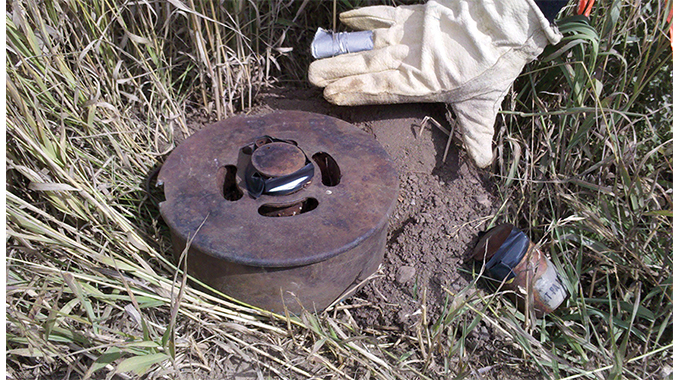 On January 23, village head for Dibutibu under Chief Mvuthu, Mr Jabulani Ncube (51), discovered an M969 anti-personnel landmine lying on the ground while he was rounding up cattle.

Another one was found by another villager Mr Chitida Dube (61) of neighbouring Sizinda Village on February 11.

A special unit was dispatched by the Zimbabwe National Army last week on Friday in the company of police to detonate the landmines and they found that villagers had discovered another one in the same area.

Chisuma and Sizinda are closer to Zambezi River on the border with Zambia.

The three landmines were detonated.

Last week an 11-year-old girl from Mwebe Village under Chief Wange had her right leg amputed just above the knee after a landmine detonated while she was playing with her sibling and two cousins behind a hut.

Preliminary investigations by police show that the landmines have been exposed by heavy rains that have been falling in the country.

A demining exercise was carried out a few years ago in the area just as in other parts of the country, especially those along the borders where there where landmines were planted during the liberation war.

Police in respective areas have embarked on awareness campaigns in areas lying along the border to conscientise communities to be alert.

“We know they once removed some landmines and i think these ones are being exposed by the rains. To us elders we can identify a landmine, but the fear is about children. So we are trying to raise awareness so that whenever they come across any suspicious object they should report to the police or local leaders.

“Recently we had three that were discovered in our area and were detonated. People are really scared but we are assuring them that as long as they don’t attempt to detonate these things they will be safe,” said the acting Chief Mvuthu.

He implored members of the public to be wary of any suspicious objects.

“Our appeal to members of the public is that whenever they discover anything they know to be a landmine or anything they don’t know they should not attempt to detonate it. Children should be taught not to touch any suspicious objects,” he said. The Chronicle

Mwonzora seemingly lied about relationship with Khupe after EOC