Dismembered body parts of a local tourist who slipped and fell into a gorge at the Victoria Falls Rain Forest on New Year’s Day have been retrieved following a six-hour operation.

The process, which was temporarily stopped due to rains, started at around 10am and finished around 4pm.

CPU roped into retrieving body of local tourist who fell…

The development is set to bring closure to the rare and tragic incident that shocked the entire Victoria Falls community.

What was supposed to be a memorable holiday in the country’s tourism capital ended in tragedy when Mr Roy Dikinya slipped and fell 108 metres into the gorge.

Mr Dikinya slipped at a Danger Point while taking selfies with his smartphone.

The smartphone was also recovered from the gorge but with a damaged LCD.

After struggling to recover the body parts which were trapped at the foot of the gorge, the rescue team yesterday managed to execute one of the most difficult and dangerous rescue missions ever witnessed in the resort town. 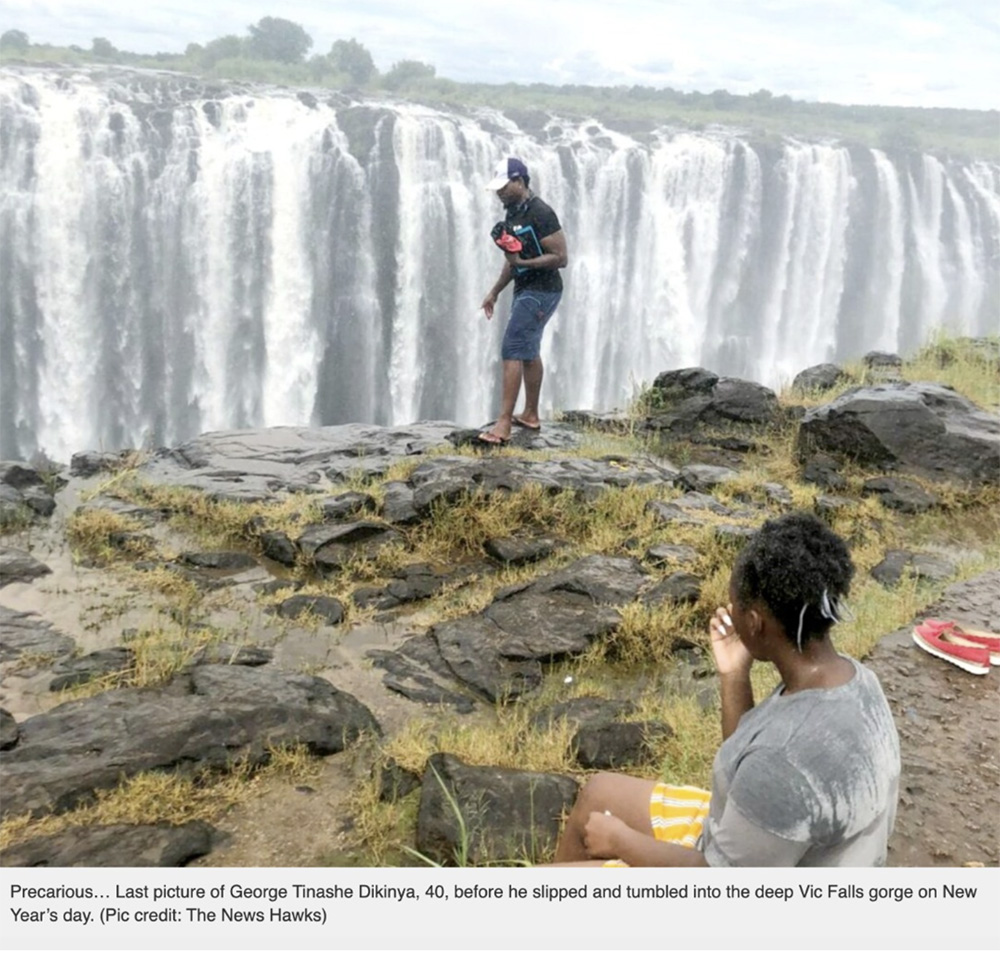 Other rescue team members had mounted zip lines as they worked as a unit.

Unfortunately, they found that the remains had been swept away by the water and only managed to recover a smart phone.

The body parts were later discovered downstream floating around the eddy just after rapid four.

The rescue team had to lower an inflatable boat down the gorge which was used to ferry Mr Dikinya’s remains from the eddy to the point where it was pulled up the gorge using the gorge swing ropes.

A joint effort by the police and its sub aqua team, Zimparks rangers, Mine Rescue Association representatives, Victoria Falls tourism players and the members of the Zimbabwe Rafting Association successfully executed the mission to retrieve some of the body parts.

Family representative Mr Terrence Dikinya thanked the entire rescue team and the Government for the effort made in retrieving the body of their loved one.

“We are very thankful to the rescue team and the Government for pulling all that needed to be pulled so that Roy’s remains are retrieved. Now we can go and properly bury him,” he said.

“We applaud the team of men and women who risked their lives to retrieve the tourist. We applaud and appreciate the unity of purpose and resilience shown by the police, Zimparks rangers, rafting guides from tour and adventure operators who worked together for this worthy cause.

“Now the Dikinya family can find comfort knowing they can pay their last respects to their dearly departed loved one,” he said.

Mr Jeffrey Sanudi, Mine Rescue Association of Zimbabwe member said this was one of the most difficult operations they have carried out.

“Normally we deal with mine rescue operations and this was one of the most difficult operations we have carried out. But fortunately, thanks to our rescue partners we successfully retrieved the body,” he said.

From the scene the remains of Mr Dikinya were taken to a local mortuary.

The Government on Monday sent a message of condolence to the Dikinya family and stressed that necessary measures are being taken to guard against the recurrence of such an incident. The Chronicle

Fantan, Levels and Dhama sentenced to six months in jail over Mbare show