Dozens of families whose homes were demolished in Budiriro last week are rebuilding their homes in defiance while a Zanu-PF linked Housing Cooperative has already begun to move in to assume ownership of the settlement as the nightmare land scam continues unrestricted.

Zim Morning Post is reliably informed that new home seekers could be resold the contentious unserviced stands under Events Housing Cooperative, once victims of last week’s demolitions vacate the settlement.

Curiously, Muguti has been speaking out against Events Housing Cooperative in public.

“They then connived with council officials to remove the other party for self-enrichment. Court battles erupted but Council lost. Council then filed as applicant and cited Events as respondents. Tembwe was not cited,” an insider said.

“Unsurprisingly, Events never challenged the order and a court order was granted in favour of HCC,” the insider added. 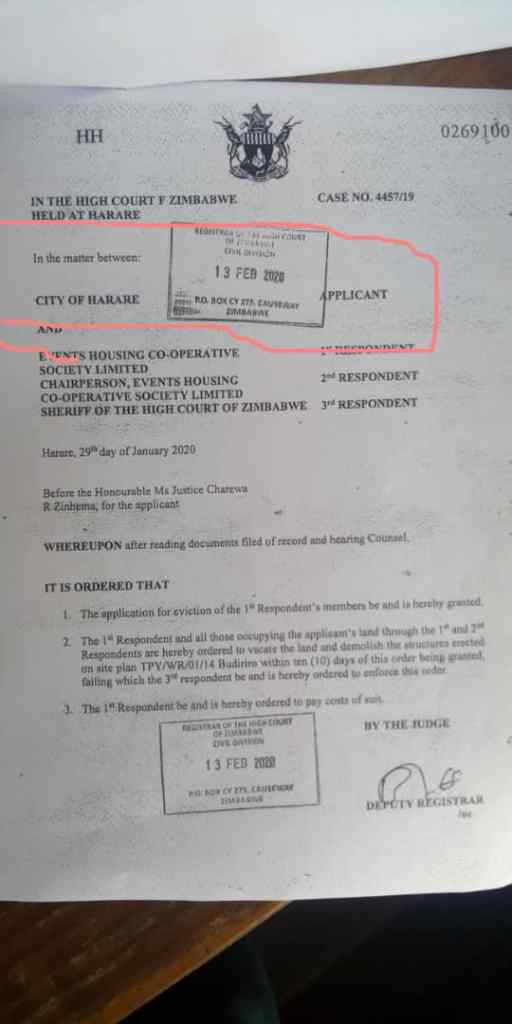 Hammer blow….High Court order granted in favour of Harare City Council against Events Housing Co-operative who did not contest application.

Harare City Council in 2014 committed to an “amicable solution” with the residents whose houses have now been demolished. 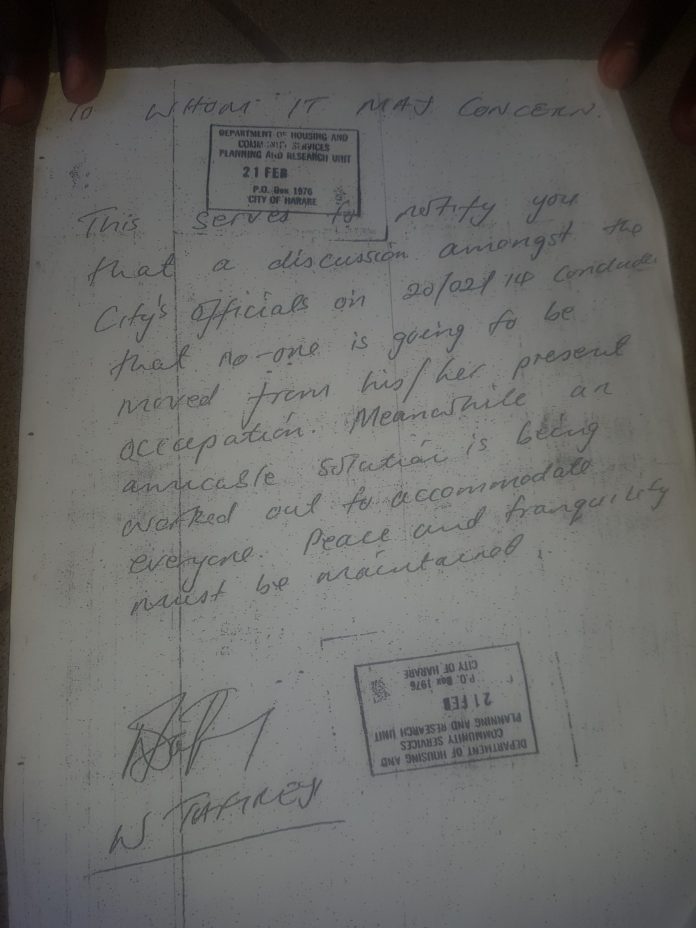 In 2009 about 200 home seekers were settled in Budiriro 4 and began to contribute towards land development as they awaited for regularisation from Council.

Investigations revealed that Council was seized with the matter and a series of meetings were held until on February 20 2014 a decision was arrived at where a council official only identified as Tafirei assured the residents that no evictions or demolitions would be done.

In a letter dated February 21 Tafirei wrote: “This serves to notify you that a discussion amongst the city’s officials on 20 February 2014 conclude that no one is going to be moved from his/her present occupation.”

“Meanwhile an amicable solution is being worked out to accommodate everyone,” he wrote.

Investigations also revealed that during some lobbying to seek regularisation some members of Tembwe housing co-operative led by Ephraim Mbuse and Ngonidzashe Muchechetere connived with council officials to form a break away cooperative named Events Housing Co-operative in 2013.

Mbuse and Muchechetere were among six officials seconded by Tembwe Housing Co-operative to engage council in seeking regularization.

Unbeknown to the members of Tembwe Co-operative, Muchechetere and Mbuse went ahead to report them as illegal settlers who did not belong to their co-operative and this resulted in a number of court orders.

On August 19 2015 Justice Francis Bere issued a provisional order to stop any demolitions without a valid court order. 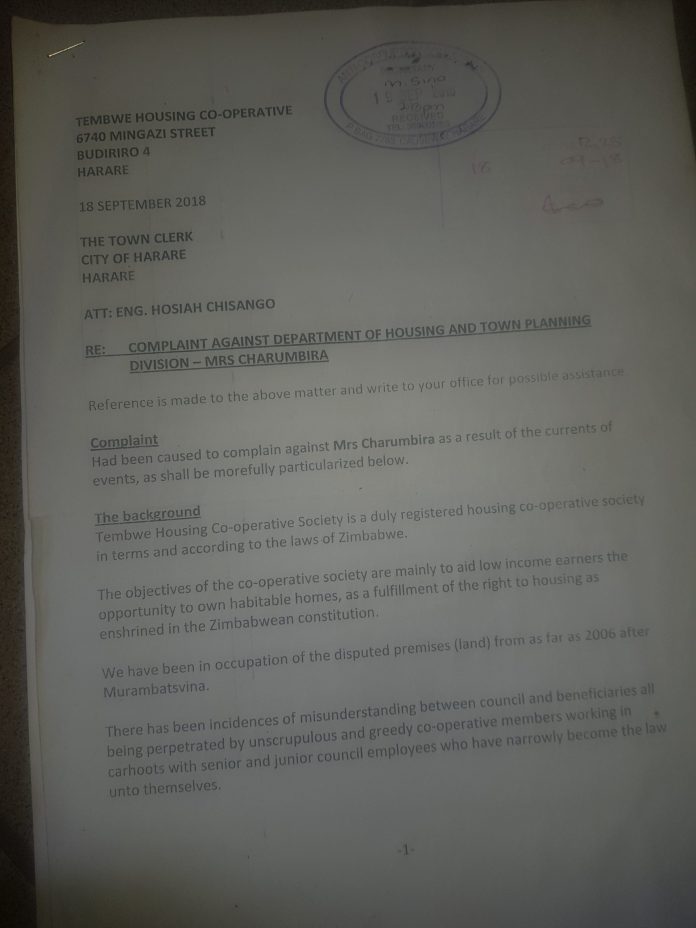 Where does Harare City Council officials come into play?

Investigations revealed that as the battle for control between Tembwe and Events ensued, Mbuse and Muchechetere won the hearts of some council officials namely Harare City Council town planner Priscilla Charumbira.

In one of the documents to council, Tembwe residents said Mbuse was imposed into their co-operative by Charumbira because “he is Charumbira’s brother and declining such a request would have resulted in the failure to regularize the settlement.”

The council, having failed to acquire a court order to demolish Tembwe households partnered with Events Cooperative to make sure that “Tembwe residents were to be displaced and houses demolished.”

On January 29 2020, Harare City Council successfully applied for the evictions of the Tembwe cooperative residents by referring to them as members of Events Cooperative.

“When that order was granted by Justice Jester Charewa we were not worried because it had nothing to do with us so we did not bother to respond to it.”

“We were all surprised last week to see bulldozers coming to demolish our houses yet we do not belong to Events Housing Co-operative.”

“To us that is a fake court order used to fix us and we will fight it,” the source said.

Residents of the now demolished homes had in 2018 raised concern over the unholy alliance between a break-away housing cooperative (Events) and Harare City Council.

As the two Housing Co-operatives were fighting the residents sought for a meeting with Chidawu to help them resolve their issues.

“We had a round table with Chidawu, Charumbira and Muchechetere. Chidawu told us to join Events or face demolitions. Chidawu said if members of Tembwe were not to dump their cooperative then they were going to be evicted and that his order was final,” said an insider.

“We still have the audios and we are ready to share them. It was clear that Chidawu has an interest and the demolitions that are taking place have his blessings because he threatened to do so if we do not join Events Housing Co-operative.”

Last week Provincial Development Coordinator (PDC) for Harare Tafadzwa Muguti defended the demolitions saying council was armed with a court order and that the cooperatives did not appeal the judgements.

This, however, was trashed by Tembwe residents who said the court order was for Events Cooperative and not Tembwe Housing Co-operative.

Muguti also said “the Budiriro homes are illegal structures as the housing cooperative sold land earmarked for a school and without any form or authorization.”

Investigations also revealed the area in question is not earmarked for a school because “the application for change of use was made by Tembwe Housing Co-operative Society with all statutory fees and requirements having been met.” 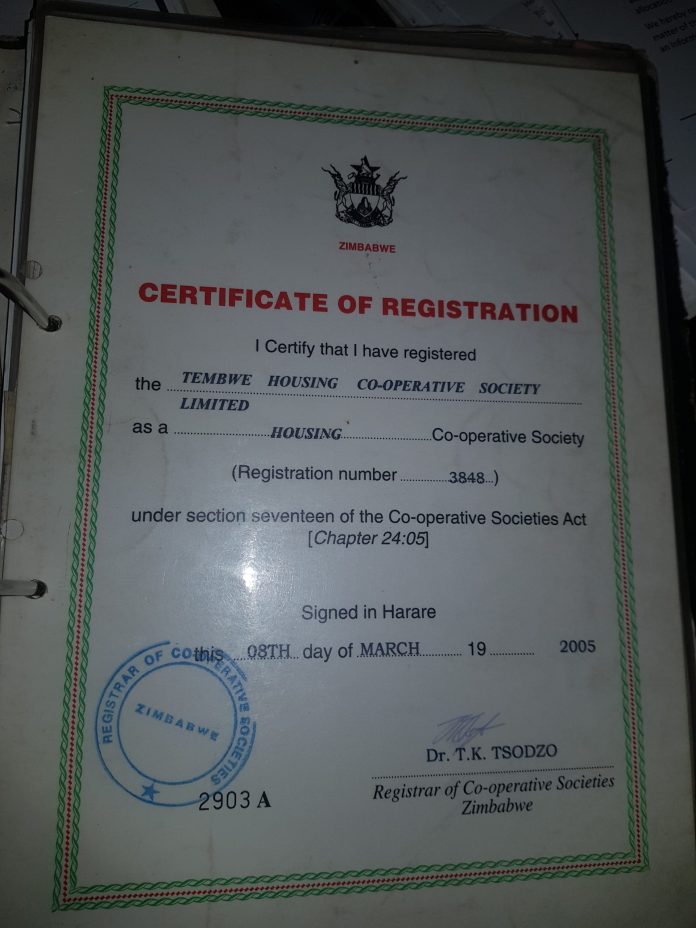 2009: Tembwe members are settled in Budiriro 4

2010: Tembwe members begin council processes to regularise (Ngonidzashe Muchechetere is one of the delegates)

2013: Muchechetere breaks away from Tembwe and forms Events Housing Co-operative

2015: Justice Francis Bere grants an order against evictions and demolitions without a valid court order

2019: Council changes tactic and connives with Events Housing Co-operative to acquire an eviction court order with Events as respondent. Events do not challenge order.