Rescue teams tasked to retrieve six miners who have been trapped for eleven days in a mineshaft in Esigodini, Matabeleland South, have abandoned their mission as the mine is flooded with water, making it too risky to proceed with the operation. 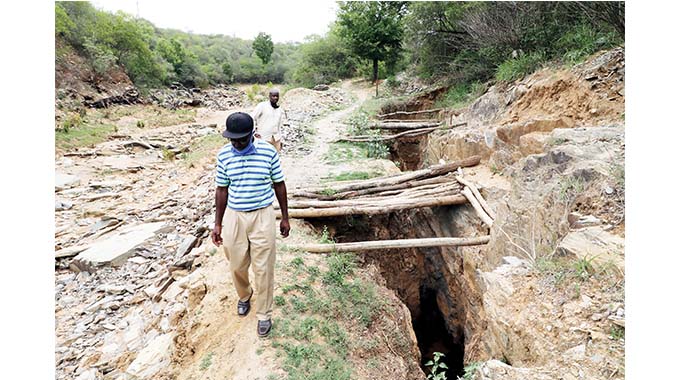 The six miners are feared dead after the mine they were working in collapsed following heavy rains that pounded Matshetshe area in Esigodini last week.

The trapped Matshetshe Mine workers have been identified as Nkosilathi Ndlovu (29), Christopher Dube (23), Ndumiso Dube (19) and Blessed Ncube (24), all members of one family from Gwanda, as well as another miner only identified as Mlilo also from Gwanda and Ndumiso Ntini (28) from Lupane.

The mine is owned by Ms Sakhile Ndlovu.

Authorities said the rescue team, drawn from the Ministry of Mines and Mining Development, Civil Protection Unit (CPU) and How Mine, could not continue with the operation as they could not risk losing more lives by trying to rescue the trapped miners.

Relatives of the victims, who initially had high expectations that the rescue mission would yield positive results, have since lost hope of seeing the remains of their loved ones as they are now feared dead.

When a Chronicle news crew yesterday visited the scene, the area had been deserted.

Makeshift structures with abandoned cooking utensils, safety shoes and empty beer bottles could be seen strewn all over the place.

The news crew spoke to villagers including Ms Patience Ncube, the mother of one of the trapped miners, Ntini.

The visibly shaken Ms Ncube, who is a widow, said her only son was the sole breadwinner who took over the responsibility of taking care of her and his siblings following the death her husband last year.

“I am really traumatised and shattered emotionally. In fact, the loss of my one-and-only son is so devastating given that he was the sole breadwinner. He left Lupane in 2016 to come here in Esigodini to do gold panning, which turned out to be his source of income,” she said.

“When my husband passed away last year, my son assumed the role of looking after us and, therefore, we have been left poorer following his untimely death. What is even more painful is that I will not be able to bid him farewell because authorities told us that it was too risky to continue with the rescue mission due to circumstances beyond their control.”

However, Mr Robert Dube from Nsindi area in Gwanda, whose son Ndumiso Dube and a nephew Christopher Dube, were among the trapped said if authorities were unable to retrieve the bodies, families should be given the greenlight to continue with the efforts to retrieve the victims.

“All we want is for the bodies of our relatives to be retrieved even if they are dead so that we can have some closure.

Experts visited the mine area to assess the situation and they told us that they couldn’t continue with rescue mission as it was dangerous to dig up the area. What pains me the most is that I don’t know whether my son and nephew are still alive or not,” he said.

“Maybe they tried hanging in there with the hope that they will be rescued only to realise that it was in vain. We, therefore, request to be assisted by having the bodies of our children retrieved so that we can give them a decent burial if need arises. If the experts are unable to help us, there are some gold panners who are used to digging in such areas and they can be given the go ahead to find people who can help us,” he said.

Mr Dube said his son and nephew had been working at the mine for the past one-and-a-half months and he last spoke to them two weeks ago.

He said the whole incident had left his family devastated and they keep hoping that their son would miraculously survive.

“My son Ndumiso has three children. The eldest are twins who are two years old while the other one is two weeks old. My son hadn’t met his youngest child which is really painful. His wife is really devastated and so is the entire family,” he said.

Mr Cecil Ndlovu, a local traditional leader, told Chronicle that the only member to escape when his colleagues were trapped had earlier warned the victims against going deeper, but they somehow ignored his advice.

He said the miners had set up camps on the banks of Thekwane River as they embarked on the gold mining activities.

“These activities have been going on for several years and we had never witnessed such an incident. Gold panning is a dangerous enterprise, but sadly due to unemployment local youths have resorted to this activity. What is worrying is that we have now entered the rainy season, which makes gold panning riskier,” he said.

Another villager, who only identified herself as MaTshuma, said: “We are traumatised as a community following this unprecedented incident in our area. While gold panning has turned into a lucrative business and a source of income for locals, I believe traditional leaders should also engage the community and conscientise them on the dangers associated with it, especially during the rainy season.”

Mr Before Thambo, a gold panner, said despite the incident, they will not stop the mining activities.

“We are unemployed and therefore gold panning is the only source of livelihood for us. We also have people from other areas coming here in search of gold including the trapped miners. It is sad that some of our colleagues were trapped in the mine shaft and might not even make it alive,” he said.

National police spokesperson Assistant Commissioner Paul Nyathi said they were working with the district development coordinator for Umzingwane and the local CPU subcommittee in the operation. He said they have since informed affected families that it is too dangerous to carry out rescue operations.

“So far, the rescue effort has been stopped by the Ministry of Mines and Mining Development officials. They are saying the mine is flooded with water such that there was a possibility of the ground caving in due to the rains,” he said.

Ms Sakhile Ndlovu, the mine owner, refused to comment, saying she was still in shock and traumatised and needed time to recover.

“I cannot say anything right now because I am in a bad state of mind. I need some rest because I am traumatised,” she said. The Chronicle