Starting alone is not enough, the discipline to stay on is what counts – Lemonade Makers

One thing the year 2020 has taught us is that one income stream is not enough. A lot of us found ourselves starting new jobs and projects that we never thought we would consider before the lockdown levels became part of our daily lives.

All my life I have branded myself as “not good at selling products ( kusai kurihwako). Well, I guess my fridge was still full then and I had options. As my established income stream died under level 5 Lock Down, I had ideas of how to survive but I was afraid to start.

My fear of using technology was overwhelming. I resisted learning a new skill and accepting technology as a key step towards a new income line. It did not take long before I realized that the empty fridge was not going to fill itself. I had to face my fears.

Dear Yaya: Wife dropped by a male just two houses from ours…

Dear Yaya: My husband is a great provider but misfires in…

Resolutions, dreams and visions for 2020 are like new babies…

Real Lemonade Makers have to be ok with starting something new. We have to be learning daily including the uncomfortable areas that do not come naturally to us. The ability to start something new is a huge characteristic needed to turn negative experiences around when life gives you lemons. 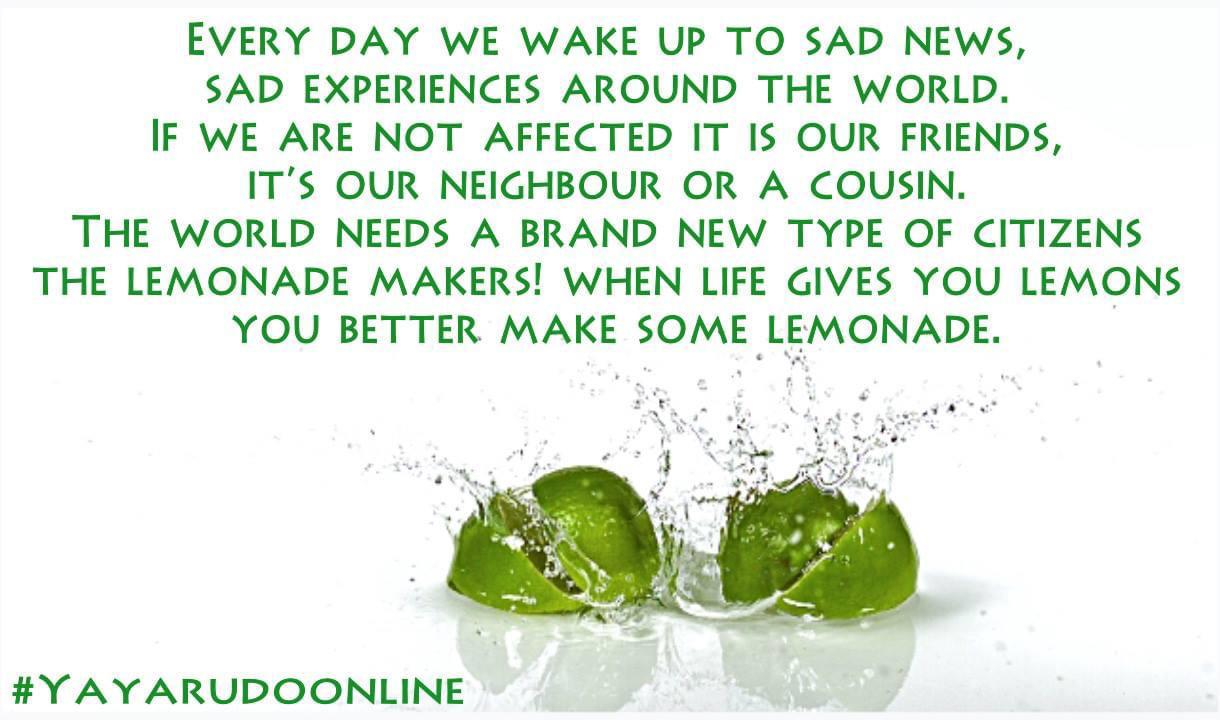 You have probably heard the phrase “just start “more this year than any other time in your life. Let me point out that starting something new is vital but it’s neither enough nor the end.

Frankly, starting is a step in the right direction to turning the lemons around you (at least we know once you start you will not remain the same). I am convinced 2020 informal start-ups numbers were at their highest as people jolted to start small projects to survive.

Well-done for starting, but starting has to be backed up by discipline. This is where most people fall off the wagon. Discipline levels distinguish perpetual victims from Lemonade Makers.

For some discipline is taking the less travelled lonely and even scary but best option .Discipline is waking up early , sleeping late missing out on the parties and missing out on short term pleasure and cheap gains for the greater good .

Lemonade Makers have to have discipline to keep pushing long after the initial excitement of starting is gone. Anyone can start something, there is really nothing extra special about starting; it is in staying in there, hanging in there that Lemonade Makers start to stand out.

The discipline in the Lemonade Maker pays off all the time, the question therefore is “Now that you started new exciting stuff during this unusual season, how disciplined are you? “

2020 Powered by grace and mercy

‘Not sanctions but corruption’, EU, UK, US tell Mnangagwa to end abuses

Dear Yaya: Wife dropped by a male just two houses from ours around 8pm from work

Dear Yaya: My husband is a great provider but misfires in the bedroom

Resolutions, dreams and visions for 2020 are like new babies – feed them

Tension in Zambia ahead of tightly-fought vote