Fear gripped residents of Makokoba and Mzilikazi suburbs of Bulawayo after muthi (charms) suspected to have been used to perform a ritual were found tied to a tree near a bridge connecting the two suburbs. 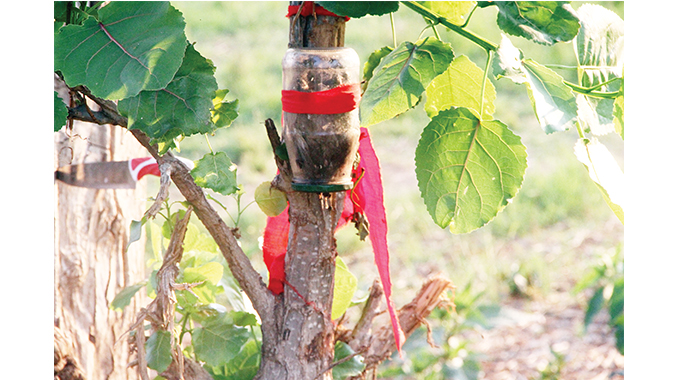 Residents who spoke to B-Metro suspected that the shocking discovery comprising a large kitchen knife stuck in a tree and a bottle of mayonnaise filled with unknown substances tied with a red cloth while facing downwards was a ritual performed by a killer who tried to cleanse himself or herself.

Adding to the horror, the mysterious substances from the bottle of mayonnaise which was mixed with water was slowly and continuously dripping like drops of blood from a wound.

The belief by residents that the items were for ritual purposes came following a series of horrific murders that have occurred at the scene where the alleged ritual is reported to have been performed.

When the news crew visited the scene on Monday afternoon, stunned residents were still flocking to witness the strange sight.

A Makokoba resident, Innocent Ncube (69), said they suspected that the muthi was left by someone who performed a ritual so that he or she could be spared punishment from his or her victim.

“A lot of people have been mugged and killed here. So, the person must have been a killer who got muthi from a sangoma to wash the blood of his or her victim off his or her hands.

“The killer may have been instructed to perform a ritual at the scene of the crime and speak to the spirit of the deceased so that it won’t haunt him or her,” said Ncube to loud approval from other residents who were at the scene.

Another resident who didn’t want to be named claimed the muthi was a ritual performed by criminals so that they can steal from people without being caught.

“I suspect the muthi is also a ritual performed by thieves so that they steal from people without being caught.

“There is no doubt that it was part of their rituals to make people sleep deeply so that they can easily break into their houses during the night,” the resident said.

Some residents believed that the juju was a sign of witchcraft.

“This is witchcraft at its worst. It’s good that B-Metro came here so that people can see these signs of witchcraft in our suburbs,” said Emily Sibanda from Mzilikazi suburb.

Mncedisi Dube, who was also at the scene, concurred with Sibanda, adding that residents were now scared.

“We are now living in fear as residents as we suspected that there is witchcraft involved because these old suburbs are known for strange things. Someone could have performed a ritual to cleanse himself or herself of witchcraft practices,” said Dube. B-Metro

Megan Thee Stallion: What do we know about the rapper’s alleged shooting?