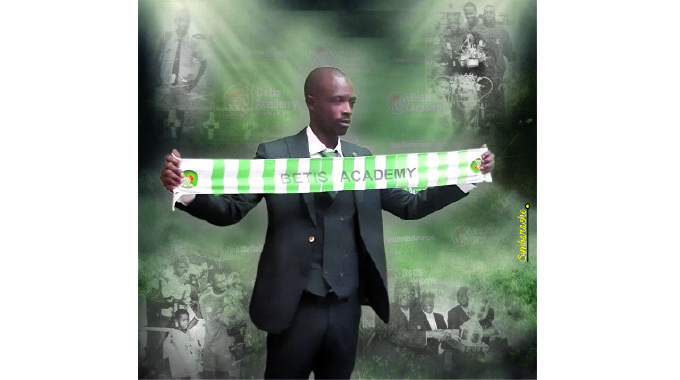 A few hours before their crucial league match against Buffaloes at Sakubva Stadium on October 12, 2014, Dynamos decided to honour their captain with a special present.

DeMbare were sitting on top of the log en route to their fourth consecutive league title under Kalisto Pasuwa when they clashed with a stubborn Buffaloes, who were under the guidance of Moses “Bambo” Chunga.

The Harare giants won 1-0 to retain advantage over ZPC Kariba, who were breathing down their necks, but behind the scenes, DeMbare were also celebrating something else — Murape Murape’s “unwavering” dedication to the football institution.

The 416-page book, written by Sir Ferguson, the most successful coach in the English Premiership era, was released on October 30, 2013 and covers the period between 2000 and 2013.

Shamu wrote a message on the inside front page cover of the book.

“We are giving you this book in honour of your unwavering, inspirational dedication to Dynamos Football Club. We believe you will graduate as a DeMbare coach!!!” wrote Shamu. The book had a huge impact on Murape.

It opened up his football mind as he began to understand the importance of talent identification and grooming in a professional set-up. Ferguson is famous for identifying and grooming talented players such as David Beckham, Nicky Butt, Ryan Giggs, Paul Scholes, Gary and Philip Neville, who all later became household names in that all-conquering Manchester United side of the 1990s.

“From that book I learnt that building a team is less important than building a foundation, and that organisational philosophy is built around culture, identifying and grooming young talent so that you always have a pipeline of next-generation stars ready to take over,” Murape told The Sunday Mail Sport.

The 40-year-old Murape, whose career could have taken him far had a knee injury not blighted his otherwise promising football path, was recently appointed head coach for the new Real Betis Academy project in Zimbabwe.

A product of Dynamos’ once-vibrant junior policy, Murape made his Premiership debut for DeMbare as a 16-year-old in 1997, the same year the Harare giants won their last league title of that decade.

“You cannot run away from the fact that a sound junior development programme is critical in any football set-up,” Murape says.

He joined Dynamos as a junior in 1993 and the club paid for his secondary school education at Churchill until he made his debut with the senior team. He made his Dynamos debut against Tongogara on November 30, 1997 when he was still in Form Three.

“It was a great honour, a dream come true and a very big challenge for me to be part of the first team at such an age.

“That Dynamos team had great players and half of them were also playing for the national team. For me to have been part and parcel of those gallant, brilliant stars at 16, while I was doing Form Three, was heaven on earth.

“My official debut was against Tongogara at the National Sports Stadium when we won the league in 1997. We went to the stadium in a convoy of vintage cars. It was a great occasion; we won that game and lifted the trophy.”

Murape won his second championship medal a decade later after putting on an inspirational show that saw him being crowned Soccer Star of the Year in 2007.

He captained Dynamos to the semi-finals of the 2008 CAF Champions League before leading the club to four consecutive league titles between 2011 and 2014.

Success and records are synonymous with Murape, whose late father, Noah, predicted that he would one day play for Dynamos when Murape was still a 10-year-old boy.

Murape’s brother, George, a former Blue Swallows player whose career was cut short by an injury in 1996, recalls how passionate a young Murape was about the game.

“He would feature in street money games played against older people, but he would still come out tops. In the streets of Zengeza in Chitungwiza, a young Murape was likened to Memory Mucherahowa.

“Even our father would always say this boy will one day play for Dynamos. He made that prediction when Murape was still doing Grade Six at Zengeza 5 Primary School,” George Murape said.

Murape acknowledges that street football shaped him into a “fighter” that he later became when he matured at Dynamos.

“That fighting spirit came from my family background. I grew up in the ghetto playing street football and money games.

“I never wanted to lose. That character was strengthened when I joined Dynamos juniors. The late Kuda Muchemeyi recruited me in 1993.

“He was tough on me in a good way. Also the junior coaches who came after him, being also former great players like Clayton Munemo, the late Biggie Zuze and Isaac Nhema, also instilled that fighting character in me.

“But I also believe I was born with something special, but a lot of things were learned along the way. Commitment, discipline, appreciation, teamwork, recognition, communication, organisation, work ethic, I think these were things I picked up at Dynamos.

“And I intend to use these qualities in my new assignment,” said Murape.

His father passed away in 2013 and Murape is now taking care of his mother, Ellen, and some of his siblings.

Murape was born into a family of 10 and two of his brothers — Marko and Ronnie — are late. George, Gilbert, Alois and Black Rhinos winger Leeroy are the surviving brothers, while his sisters are Petronella, Regina and Sandra.

Murape is married to “childhood sweetheart” Amanda Chinyanga and the couple has four children — Elroy (18), twins Ethan and Etana (10) and Eliel (8).

“Probably it was because he grew up within the Dynamos system. It was natural for me to make him my captain during that campaign.

“He was a very good leader on and off the pitch. You could see his desire to help upcoming youngsters, so I guess his new role as academy coach will suit him well.

“Murape hated losing so much, he had this hard-nut character when it came to fighting for the badge. Naturally, Murape was a fighter.

“I am sure he will instil that never-say-die attitude to the youngsters in his new role (as Real Betis Academy coach).”

David George, who worked with Murape when he graduated into the reserve side, still cannot fathom where Murape drew his energy.

“He was a naughty young boy when I first encountered him, but he was also very talented,” says George.

“Murape loved football, you could see his passion and desire. Even when injured he would still soldier on for the team.

“I remember when I was still reserve side coach I would go to his home in Chitungwiza to talk to his parents. His other advantage was that his parents supported his career.

“Murape could do strange things, even with that small body. Up to now I still do not understand how he did some things he did back then,” said the former Dynamos coach.

“He was my youngster when he came to Dynamos. I was already established in the senior team when Murape was promoted in 1997.“But, one thing was clear: You could see that the boy was a lion, a fighter,” said Muzadzi.

Real Betis Academy Zimbabwe president and chief executive officer, Gerald Sibanda, says Murape was their natural choice for the job, given his background.

“Murape is a product of grassroots football development programme in Zimbabwe. He knows what it takes to be a 13-year-old boy marching into one of the biggest football clubs in Zimbabwe (Dynamos).

“Rising through the ranks and achieving great success as a captain for the same football club is a great success story for us at Betis Academy.

“We do believe that his story through the highs and lows of his successful career will give enough mentorship and inspiration to our young football players at Betis Academy.

“We will support him and give him a fantastic environment to implement our coaching philosophy,” said Sibanda. The Sunday Mail