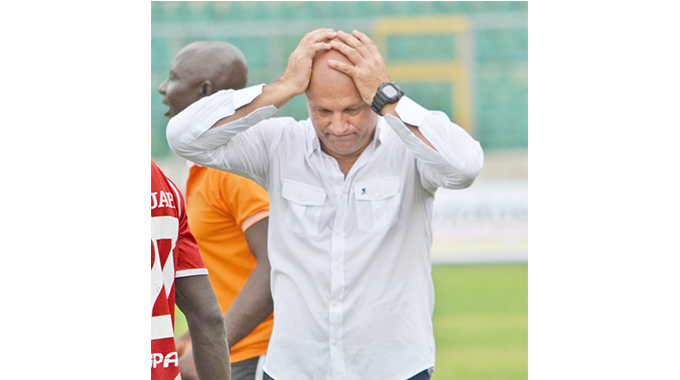 Zifa unveiled the Croat as Warriors’ head coach in January, but before he could acquaint himself with local players, a global outbreak of the Covid-19 pandemic forced governments all over the world to impose restrictive lockdowns that forced the freezing of all sporting activities.

When the local lockdown was effected at the end of March, all teams had completed their pre-season preparations and the Castle Lager Premier Soccer League kick-off was just a few days away.

Judging from that match, all was set for the season to kick-off when, boom, Covid-19 infections landed on our shores and the Government imposed a lockdown, haphazardly hampering any plans that had been set in motion for what was promising to be an exciting football season.

Six months since the initial three-week lockdown was effected before being extended to date, albeit with relaxed restrictions, no sporting activity has taken place in the country.

At the beginning of the lockdown, most sports clubs were very vocal, indicating that they had developed individual training schedules for their players to follow at home and report via various virtual platforms, but that tended to fade away as the lockdown prolonged and reality slowly sank in that actually there may be no sporting activities for the rest of the year.

Nature has, therefore, denied Warriors’ coach Logarusic the opportunity to watch the best of locally-based talent, presenting him with a mammoth task when he assembles a squad for the Africa Cup of Nations qualifier against Algeria in November. The truth is that the Croat currently finds himself between a rock and the deep sea should Caf insist that the fixture goes ahead. Since the match between Highlanders and FC Platinum in March, no team has trained together or even in small groups for that matter.

When the Sports and Recreation Commission reviewed suspension of sporting activities in the country, it placed the different sports into three groups, and unfortunately football found itself in the high risk category since it’s a high contact sport.

This meant any hope of returning to training, even in small groups, was wiped out and unless this prevailing status is reviewed, Logarusic’s hope will only lie in assembling a Warriors’ squad comprising exclusively foreign-based players.

Besides this route proving costly to Zifa in terms of footing called-up players’ traveling expenses, foreign clubs employing our players could refuse to release them.

While under normal circumstances clubs are obliged to release players to national teams for Fifa sanctioned international games, the world football governing body has relaxed its rules and stated that if there is a mandatory quarantine in the country where the club is based or in the country where the international will take place and there are also travel restrictions between the two locations, with no specific exemptions for the players, then clubs are within their rights to refuse.

Although it could be possible that by the time of the match against Algeria more relaxations would have been announced and international travel open, the worst-case scenario for Logarusic could be that of players called-up asking to be excused for fear of contracting infections if they travelled from their bases.

Zimbabwe has eased mandatory periods of quarantine and self-isolation for incoming travellers that produce Covid-19 free certificates, but the truth, painful as it may be, is that most of our foreign-based players feel much safer and shielded from possible infection at their bases in bio-bubbles. A bio-bubble is a strictly controlled bio-secure environment where players, officials, management and staff are regularly monitored for Covid-19 infection.

The bubble is a “sanitised biosphere” with strict entry standards and limited movement outside of its cordon.

If only Zifa and the PSL can afford to create such a bio-bubble, they can easily convince the Government to allow topflight football to resume in the country.

However, the bio-bubble route seems far-fetched in reality because our football authorities can’t afford to stage matches in empty stadiums and in accordance with strict health protocols in use in neighbouring South Africa and other foreign leagues.

To show lack of seriousness by our football authorities, no single local player has even been tested for Covid-19 since the pandemic’s outbreak and should Zifa be given the green light for football to resume, it means they’ll be starting from scratch to test players and officials and that could spell doom if there are high positive cases. Besides lack of testing, picking any locally-based player for national duty would be comical, considering that they haven’t kicked a ball competitively or been physically monitored during the lockdown period.

But the headache for Logarusic is whether he would be able to assemble a squad for his first official assignment as the Warriors’ head coach during one of the most unusual periods in earth’s history. He can’t pick players that haven’t kicked a ball for almost a year. The Croat needs to have watched the players in action to see what he can extract from them to instil his tactics, but right now, he may not even know a single locally-based player’s name.

The last Warriors’ coach to find himself in almost a similar dilemma Logarusic probably finds himself in right now is veteran Gibson Homela in 1995. All was going well for the Warriors’ team he coached and they were strongly in contention to qualify for what would have been Zimbabwe’s first appearance in the Africa Cup of Nations that was hosted by South Africa in 1996. The Warriors were due to play against the then Zaire, now DR Congo, but just like in 2020, there was a deadly outbreak of a killer virus, Ebola, which had killed thousands in the Central African country.

All players Homela had called-up reported for camp, but they all withdrew from the squad, fearing contracting the deadly virus if they travelled to Kinshasa despite repeated safety assurances from the World Health Organisation.

Their 11th hour withdrawal forced Homela to assemble a make-shift squad consisting of players that were readily available to travel just hours before departure.

There was carnage in Kinshasa, as Homela’s hastily assembled team was mauled 5-0 by Zaire and that humiliation virtually ended Zimbabwe’s then unending quest for their first Africa Cup of Nations qualification.

Hopefully Homela’s 1995 misfortune will not befall Logarusic, but as things currently stand, signs seem to be tilting towards a repeat of that 1995 shame, unless something drastic happens. The Chronicle