Police have arrested an eight-member gang of suspects, among them a police officer, who have been on the wanted list for a series of high-profile armed robbery cases committed in several parts of the country. 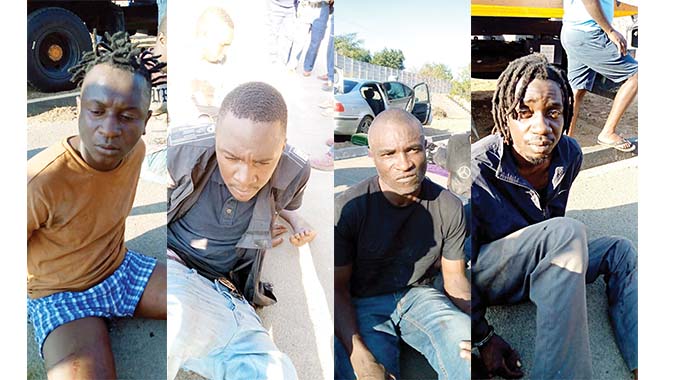 Musa Taj Abdul (46) of Barham Green in Bulawayo, one of the country’s most wanted armed robbers, who has been on the run for more than 20 years and is believed to be the mastermind behind a spate of criminal activities, was arrested together with his seven accomplices.

Abdul, Liberty Mupamhanga (29) of Glen Norah B in Harare, Godfrey Mupamhanga (27) of Lusaka Highfield in Harare, Charles Lundu (47), Prince Makodza (31), Innocent Jairos (32) all from Epworth in Harare, Rudolf Kamhanga (29), a former police officer residing at Chishawasha Flats, Mbare in Harare and Tapiwa Mangoma (27), a Beitbridge-based police officer, were arrested on Monday while hiding at a house in Dulivhadzimu suburb in Beitbridge.

Detectives with the assistance of police dogs had to fire warning shots to arrest the suspects as they tried to escape.

7 days since his acquittal, police fail to release… 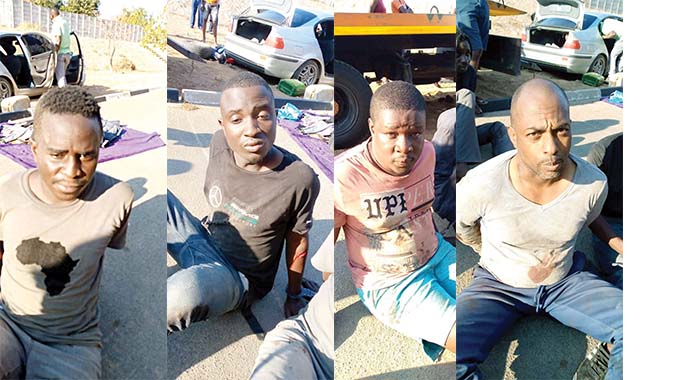 The gang is allegedly linked to armed robberies, which occurred at Makoni Shopping Centre in Chitungwiza, Blue Circle, Glen Norah B and Marlborough in Harare among other cases around the country. Police recovered a silver Noringo pistol and live rounds.

National police spokesperson Assistant Commissioner Paul Nyathi yesterday confirmed the arrest, saying the gang has been on their wanted list in connection with several armed robberies and murder cases.

“The Zimbabwe Republic Police confirms the arrest of eight suspects who were on police wanted list for high profile armed robbery cases. They were arrested on Monday at a house in Dulivhadzimu suburb in Beitbridge,” he said.

“The gang was arrested while hiding in a certain house in Dulivhadzimu and had to jump over a precast wall as they tried to escape with police officers in hot pursuit, assisted by ZRP Canine section, firing warning shots to effect arrest on the armed robbers.”

Asst Comm Nyathi said the suspects are linked to several robberies around the country.

Sources said police acted on a tip-ff after the armed robbers were spotted at Mashavire Business Centre in the border town.

“Acting upon the information a team of detectives, support unit and canine details teamed up and made follow ups. They got further information that the suspects were using a silver BMW motor vehicle registration number AEW 0428. The team went to Mashavire Business Centre to check for the suspects, but they had already left,” said the source.

Police later spotted the suspects’ car parked at Mashakada Business Centre and there was nobody in the vehicle.

“Police laid an ambush from a distance as they monitored the suspects’ vehicle. After about 30 minutes, one of the suspects with dreadlocks approached the parked car and drove it towards Mashavire Busines Centre,” said sources.

Police officers followed the car to a house in Dulibadzimu.

“The driver then went into the house where police officers followed and pounced on the suspects who were inside the house and they fled in different directions as they tried jumping over the precast wall, prompting police officers to fire warning shots and cast police dogs to pursue them,” said the sources.

Police officers managed to arrest the suspects and conducted searches leading to the recovery of the silver Noringo pistol with an obliterated serial number and a magazine of 11 live rounds, 228 bore gauge liverounds on a webbing belt placed in a black satchel stashed in a washing basket.

Sources said one of the suspects, Mangoma who is a police officer, tried to distract police officers by claiming that the washing basket had his dirty linen.

A pair of number plates AEX 1577 was recovered under the bed. The car was also searched and the team of police officers recovered a black balaclava stashed in the vehicle boot.

The car was searched in the database and it is registered in the name of Westend Food World, 122 Mbuya Nehanda Street, Harare.

It was, however, not reported stolen. The recovered number plates were also checked in the database and are registered under the name of Anesu Kudakwashe Kubara of Mabelreign in Harare and are for a Mazda RX8, which was also not reported to have been stolen. The Chronicle

Lionel Messi tells Barcelona he wants to leave the club

7 days since his acquittal, police fail to release Chin’ono’s camera