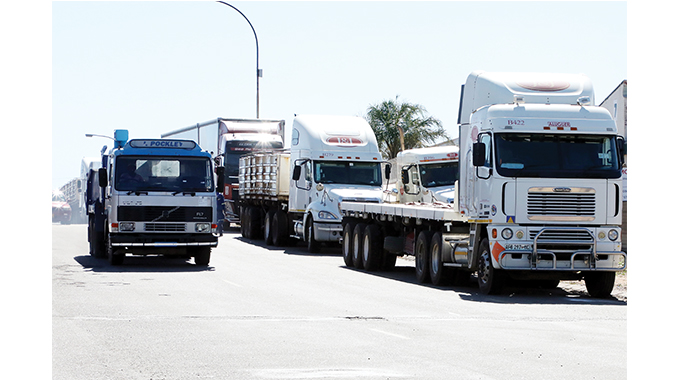 At least 47 drivers have been arrested for ferrying passengers in violation of Covid-19 lockdown regulations, with grain millers warning drivers that they face a mandatory 21-day quarantine.

The Police National Traffic Unit has been deployed to account for such drivers.

Some of the culprits were fined, while others are expected to appear in court soon.

“Since March 30 to date, a total of 47 truck drivers have been arrested,” he said.

“We are, however, warning haulage truck and private vehicle drivers who are ferrying people between cities, within cities, and even some border jumpers that it is a criminal offence.

“Besides being a criminal offence, this act poses a risk to the Government’s efforts to fight the Covid-19 pandemic.

“Police checkpoints, roadblocks and patrols have been activated to account for such drivers. Haulage trucks should stick to their mandate of transporting cargo from one point to the other. Transport companies are implored to take action against errant drivers.”

Asst Comm Nyathi said the traffic officers were patrolling on the roads checking driver’s licences as some were driving without proper documents.

Police have also impounded unregistered vehicles that were on the roads, amid reports that some drivers were removing registration number plates to engage in criminal activities or ferry passengers.

Removing the number plates is a way of evading police so that the drivers cannot be tracked.

Police have arrested 62 801 people countrywide since March 30 for violating lockdown measures, with the bulk of them paying deposit fines.

In the case of drivers ferrying maize from South Africa to Zimbabwe who travel with their girlfriends, the Grain Millers Association of Zimbabwe (GMAZ) said they risked being quarantined and prosecuted.

GMAZ media and public relations manager Mr Garikai Chaunza said in a statement that they had been alerted of the unacceptable behaviour.

“The Government of Zimbabwe has communicated its concerns to us with regards the conduct of most of your truck drivers who tend to travel in pairs with the opposite gender outside the scope of their duties and also carry passengers for monetary benefit,” he said.

“While the country critically requires maize imports to address national food security, the aforesaid conduct cannot be tolerated and condoned as it militates against the national effort in combating the spread of the Covid-19 pandemic.”

Mr Chaunza said while the association noted with appreciation the drivers’ continued support in the carriage of white maize from South Africa into GMAZ’s private silos in Bulawayo and Harare, they must adhere to the country’s regulations. The Herald