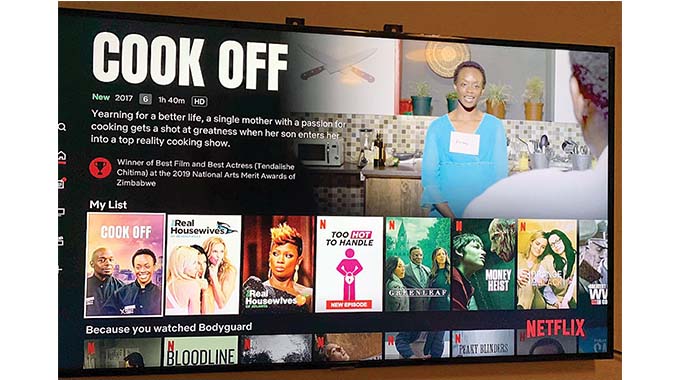 Zimbabweans are excited after history was made on Monday when award-winning film, Cook Off premiered on the world’s leading Internet entertainment service, Netflix.

Cook Off, a 2017 comedy film showed its viability by making its way onto the platform that has a membership of over 180 million worldwide.

The film which is a tale of a single mother who enters a reality cooking show was produced by Joe Njagu, written and directed by Tomas Brickhill.

Commenting on the film’s Netflix premiere, an excited Mr Remo said he watched the movie with his family with the Zimbabwean flag by their side as a way of appreciating the adept talent the country has.

Netflix appoints Masiyiwa as board member

“Couldn’t wait for 7.30pm CAT to watch it with kids. A good example to use as reference to my kids that great things do come out of #Zimbabwe!

“We couldn’t watch it without our flag! Well done to everyone involved! Loved it,” read the Twitter post.

One Chipo Masuka said: “This was good a good watch . . . really enjoyed it. I liked how it had day-to-day issues experienced by Zimbabweans. It’s really relatable. And everyone deserves a son like Tapiwa…”

For some though, this recognition make them reflect on the local film industry. They said it is sad that Zimbabweans only show interest in their own productions after they have been endorsed by other people.

One Dr Maisiri said he realised that he was missing out on local content as he only got to watch Cook Off, three years after its release and appreciated it. “Y’all didn’t tell us you had such an amazing movie?

Watched it yesterday and I loved it. Now all my friends, Zimbabwean or not, will have to watch it!” read his tweet.

For a long time, content producers have been complaining that locals do not support them as they do not watch their productions.

But it seems that is about to change judging by the way another local up-and-coming production, Wadiwa Wepa Moyo received support on YouTube where it was shown from February this year.

Netflix appoints Masiyiwa as board member