A Chitungwiza man allegedly committed suicide at the weekend by hanging himself at church premises. The incident took place at St Mary’s Anglican Parish in Chitungwiza on Sunday. 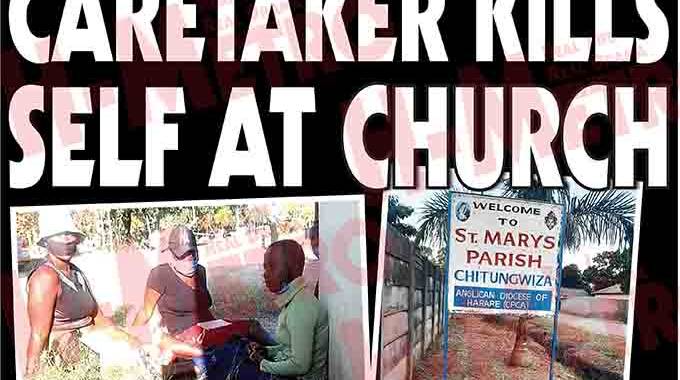 When H-Metro visited the place, the body of the deceased who was identified as Nation Pfunhani, a caretaker at the church, was still at the scene with police taking statements.

The police could, however, not immediately confirm the cause of the death although, H-Metro gathered that it was a result of domestic dispute that has been going on for some time.

Harare Provincial police spokesperson Inspector Tarirai Dube confirmed the incident but was yet to get finer details.

“They are yet to establish the real cause of the death,” said Insp Dube as they continue with their investigations.

The deceased’s family questions his wife

Sister to the wife Netsai Rugoyi gave a different version.

“The late Pfunhani was married to my sister Patricia Rugoyi for four years and together they had a three year-old son.

“From what my sister told me and from what I saw, I dont think there was something happening. I am equally shocked with what just happened.”

“This morning (Sunday) bamunini escorted us to where we work with his wife and everything was going on so well.

“We work at Chikwanha kwatinotengesa tengesa. He then left us at corner Mhuriimwe School and he came back. All this time we were even talking nicely.

“We then came back I think it was around 11am and when we got here we saw some church members who were looking for BaZviko (The late Pfunhani). They wanted the keys since he was the caretaker.

“I then left her while she started to look for the keys, she told me she looked for the keys where they usually left them and couldn’t find them,” she said.

“So she called another member who was there to help her, upon breaking the door she saw her husband hanging on the roof.

The sister added: “To say the truth I don’t think there have been something going on. They have been doing good unless my sister has been hiding somethings from me.”

H-Metro understands that Pfunhani have been working at the Anglican Church since 2011.

At the scene, the wife was not at there and only a few Phunhani family members and those from the church were there.

The wife and the sister were later called to come back.

Asked why they had left, the sister said she had gone to give her some food since they stay very near to the church.

“I had gone to give her some food. But when we came back we were told we were not supposed to leave the house to which we admitted we were wrong because we actually didn’t know.”

The police at the scene tried to look for a suicide note but couldn’t find any.

And it is also alleged that there was also no oral word from the deceased.

The incident is said to have happened around 10 am but when H-Metro left the place around 5pm the body was yet to be removed.

It is also alleged that the deceased had no funeral policy.

H-Metro sought a comment from the deceased family but the one who was said to be his father said he had nothing to say.

“I can’t help you, as you can see we have just arrived we don’t know what happened,” he said.

Some of the mourners who spoke to H-Metro described Pfunhani as a quiet person who was always jovial.

They were equally shocked to learn of his death since they had saw him in the morning.