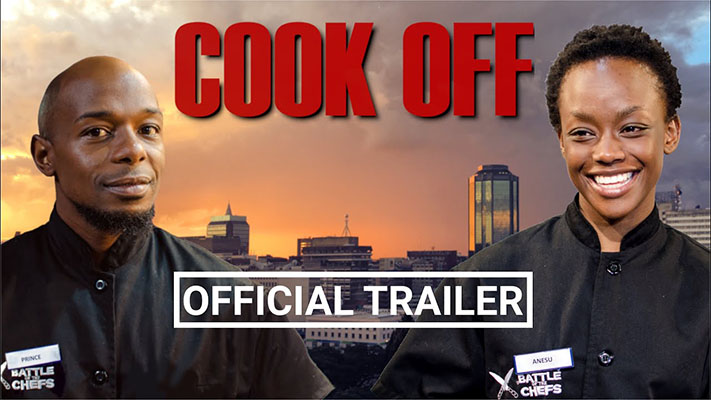 Local film “Cook Off” is set to make history when it becomes the first local production to show on popular online streaming service Netflix which has over 160 million subscribers.

“Cook Off” filmmakers said they have sealed a deal with Netflix and the film will show soon.

Netflix is a streaming service that allows its members to watch a wide variety of award-winning television shows, movies and documentaries on Internet-connected devices.

The award-winning film is a tale of a single mother who enters a reality cooking show without professional culinary experience and the odds are seemingly against her as she battles with top chefs.

It was written and directed by Tomas Brickhill and produced by Joe Njagu.

Brickhill said this was a great achievement in the history of Zimbabwe.

“We are really proud of this achievement and feel that this shows the hard work and talent that every member of the cast and crew brought to this film,” he said.

Brickhill said the way the movie has been premièring in different countries has helped in striking the Netflix deal.

“Cook Off’ was selected to screen at a number of international film festivals — over 15, including Rotterdam, Seattle, Durban, Nairobi and PAFF in Los Angeles. It really helped to give the film great exposure although we could not afford to go to all the festivals. We made some really helpful connections at the ones we attended and these helped us to secure the distribution deal,” he said.

He said this is great opportunity for the film industry as it will open more doors for other producers and filmmakers.

“We know there is a wealth of talent in Zimbabwe, and we encourage our friends in the industry to keep creating. It is so important to maintain high standard in the work that we do in order to attract international attention.

“Even though we did not have a big budget for this film, the cast and crew were total professionals throughout because we all shared the dream of how far this film could go. We saw ‘Cook Off’ as an opportunity to showcase our talents,” he said.

Njagu said he was excited and will announce the date of the screening on Netflix soon.

“We will be announcing the release date very soon. We can’t wait to share this feel-good movie with the world. Initially, we were worried about releasing it during the current pandemic situation, but then realised that people might need the distraction and entertainment now.

“We’ve been lucky to be able to screen the film in a number of countries around the world, including at festivals in South Africa, Kenya, Zimbabwe, Swaziland, Botswana and Zambia. We’ve also screened at festivals in the US, the UK, France, Belgium, Russia, Australia, New Zealand and the Netherlands, where we had our international premiere,” he said.

Njagu said Netflix bought the film but could not disclose the figure.

“This is a first for Zimbabwe and as actors and film producers, we should be challenged and unite to create more productions that tell a Zimbabwean story as this will also market the country.” The Herald