National University of Science and Technology (Nust) students who did not manage to travel to their homes outside Bulawayo when the national lockdown was announced on March 30 are now stranded and running out of food. 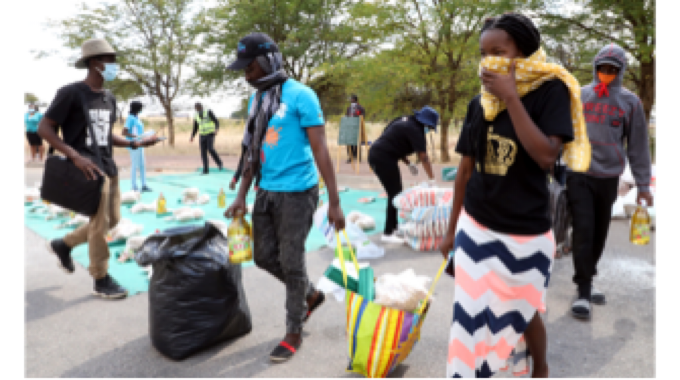 After President Mnangagwa first announced the national lockdown, he subsequently extended it by a further two weeks twice and the stranded students did not anticipate that the lockdown was going to be extended hence they did not travel back home.

Universities just like schools have remained closed as Government is conducting consultations on how to open them while ensuring the safety of learners.

Nust students who received food hampers from Non-Governmental Organisations yesterday at the institution’s campus said most of them were running out of food.

The students said they never anticipated that the lockdown would be extended hence their decision to stay put at their lodgings.

Lockdown regulations prohibit inter-city travelling and most of the students are not from Bulawayo. Civil and Water Engineering second year student Mr Pardon Gandiya said life had become increasing hard for them due to the prolonged lockdown.

“When this lockdown was announced in March, we thought it was going to be for that three weeks. So, to me it didn’t make sense that I travel back home in Harare and return after three weeks. But now it has been extended for the second time and I no longer have food at home,” he said.

“I am struggling for survival. I cannot even pay rent to my landlord who is demanding foreign currency. Due to this lockdown my parents were also not working making life even more difficult.”

He said the food hamper which consists of a 2 litre of cooking oil, soya mince, 2kg rice and 500g salt came handy for him and his friend whom he shares a room with.

Final year Banking and Investment student Miss Barbra Pangai from Gutu in Masvingo, said she did not travel back home as she wanted to dedicate more time to her dissertation.

While the lockdown gave her ample time to focus on her work, it has seen her struggling to make ends meet.

“For starters it has been difficult to just travel to buy groceries. We are facing difficulties in accessing food or even money while we are here. Some of our parents, due to the national lockdown have had their salaries cut.

“Therefore, it has been difficult for them to support us and our families back home. We appreciate this donation as it cut costs on some of the goods that I would have bought,” she said.

“Some of the students are now food insecure as parents and guardians have lost their source of livelihoods. While we are students, this is an adult population and most students would not want to be bothering their parents as they understand the challenges they are facing.

“Some of the students are no longer getting financial support they were getting before the lockdown because their families are also affected by the lockdown,” said Mr Dombo.

He said the students’ body has also started counselling for mental distress.

“Some of the parents and guardians of the students live and work in Covid-19 hotspots in the diaspora. So, we have observed that students are facing psychological issues as they worry of their families considering the seriousness of the virus in other countries,” he said.

Mr Dombo said the food donation came after they engaged some organisation to assist the vulnerable student population.

Zimbabwe Humanitarian Livelihood Development Trust humanitarian officer Miss Charmaine Dube who was part of the food hampers mobilisation team said students’ welfare is overlooked when Government is addressing the needs of the vulnerable people in communities.

She said her younger sister was a student at a local university and after interacting with her she got the picture of challenges facing university students.

“My appeal is for Government to come up with interventions that also target students. They come from the same communities that are facing challenges. They are also facing challenges and need help,” she said.

Organisations that were heavily involved in sourcing food hampers for the students are Organisation of Rural Associations for Progress (ORAP), Eat out Movement and Feed the City Nust acting communications and marketing and director Mr Thabani Mpofu expressed gratitude for the food hampers mobilisers saying students were in great need of a bailout, considering that they were grounded away of their families.

“There are about 100 students who have benefitted from this food hamper donation but the students who are living in the areas surrounding Nust could be more. The donation was mobilised by the SRC who got in touch with students through their contacts.

“As the university we are just here to observe the kind gesture and we are grateful for the donations that our students have received,” said Mr Mpofu.

He said students did not anticipate that the lockdown was going to be extended hence most of them had not travelled to their respective homes. The Chronicle

Ethiopian Airlines ready to be saviour