Daring armed robbers raided a Zimbabwe Revenue Authority (Zimra) container depot in Bulawayo and went away with a consignment of 148 boxes of Broncleer, a cough mixture which was banned over abuse as a euphoric drug.

The total value of the contraband, which includes four cases of gin, is about US$20 000.

The stolen goods believed to have been smuggled from South Africa were confiscated by Zimra on Tuesday and the gang struck at the depot on the same day at around 7.30PM.

The suspects were armed with an FN rifle and they threatened to shoot the security guards who were manning the premises in the event that they raised alarm before tying their hands using a rope.

The suspects whose exact number could not ascertained used bolt cutters to destroy the locks at the main gate to access the premises.

They found four security guards and ordered them to lie down at gunpoint before they tied them and offloaded the impounded goods from the truck.

The contraband, which was concealed under a consignment of groceries, was being transported to Bulawayo in a haulage truck when it was intercepted by police in Esigodini.

The truck was seized and taken to the Zimra container depot at Raylton Industrial Area in Bulawayo.

When a Chronicle news crew visited the depot yesterday, police had been deployed to beef up security. The empty truck, which had been carrying the stolen goods was also parked at the yard.

Sources said the suspects were travelling in a Toyota Quantum which had no number plates. 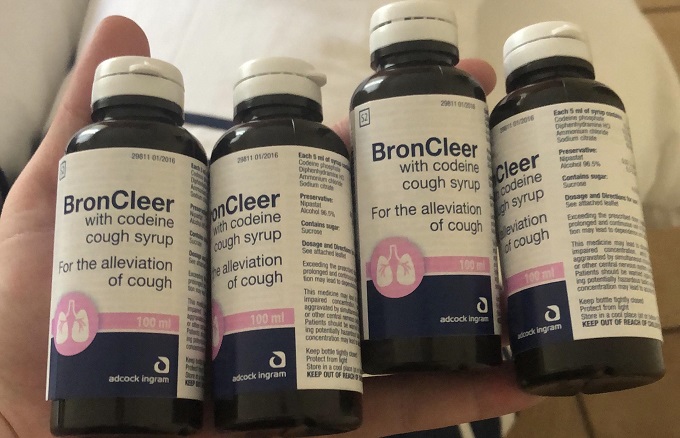 “They tied up four security guards and offloaded 144 boxes of bronco (Broncleer) and four boxes of Gordon’s Gin from the impounded truck before they drove off at high speed,” said the source.

Sources said when the truck was intercepted at a roadblock in Esigodini, the driver tried to bribe a police officer so that he could be allowed to pass through without being searched.

The police officer was, however, adamant and demanded to search the truck leading to the discovery of the illicit drugs and he immediately alerted Zimra officials in Bulawayo.

Chronicle established that the suspects had been monitoring the truck between Esigodini and Bulawayo while it was being escorted to the Zimra container depot with the intention of hijacking it.

“After failing to hijack the truck, that is when they decided to raid the Zimra container depot at night. It appears that these robbers knew what the truck was carrying,” said the sources.

“I can confirm that we had a robbery case which occurred at the Zimra container depot in Bulawayo last night (Tuesday night) where security guards manning the premises were attacked by a group of robbers. The suspects used bolt cutters to destroy the locking system at the main entrance before they drove in,” he said.

Asst Comm Nyathi said two suspects who were armed with iron bars and bolt cutters emerged first from the Toyota Quantum and confronted the security guards.

He said they were later joined by their accomplices and they offloaded the loot from the impounded truck.

“Initially, it is these two suspects who confronted the security guards and later on the kombi drove into the premises and it could not be established how many others were inside the vehicle. They loaded some illicit goods which were in a truck that had been impounded with smuggled goods, which included 144 boxes of Broncleer and four boxes containing bottles of Gordon’s Gin,” said Ass Comm Nyathi said.

He said the suspects sped off.

“We are investigating and we are also appealing for information from members of the public so that we establish some links. According to our preliminary investigations, the two suspects were part of a gang of robbers and as police we would like to assure the public that people who are engaging in any form of criminality will be accounted for,” said the police spokesperson.

Meanwhile, police in Beitbridge from the anti-corruption unit on Monday intercepted two vehicles, a Toyota Granvia and a Nissan Caravan near Panda Mine along the Limpopo River carrying smuggled groceries and arrested three suspects.

The value of the goods, which included soap, sugar, cooking oil, rice, flour and lotion was not stated.

“Three suspects were arrested in connection with the case. Investigations conducted so far revealed that one of the vehicles, a Toyota Granvia did not have a customs clearance certificate,” said Ass Comm Nyathi.

He said they also arrested a Kwekwe truck driver on the same day at a roadblock in the border town for smuggling groceries from South Africa through Beitbridge Border Post.

The driver had abandoned the truck near GMB depot and fled before he was arrested. The truck was impounded by Zimra. The Chronicle