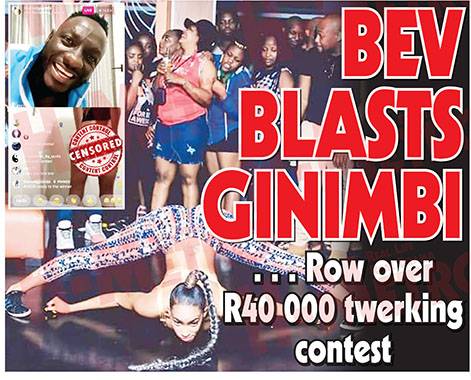 Inimitable dancer Beverly “Bev” Sibanda was left seething after she was barred from participating in a twerking competition run by flamboyant businessman and socialite Genius “Ginimbi” Kadungure.

However, it was Bev’s failure to showcase her twerking skills when it was supposed to be her turn which has since divided opinions.

Some social media users claimed Bev didn’t qualify since she is a seasoned dancer while others said the Sexy Angels boss who could have easily pocketed the prize money was sabotaged.

Contacted for comment, Bev said she was still heart-broken as she wanted to take part in the contest.

“I’m still disappointed by Ginimbi’s ‘hangers’ who sabotaged me after realising that I could easily take away the money.

“I was ready in my dancing costumes but when it was my turn, I was blocked and that alone showed that there were some conspiracy which took place,” she said.

Bev said her ‘sabotage’ exposed Ginimbi’s ‘hypocrisy’ as a compromised adjudicator and sponsor.

“It’s clear that this thing might have been stage-managed because I was sabotaged.

“From the onset, this thing was free for those with bundles and can twerk but why was I not allowed to showcase my skills.

“Of course we have seen winners being given money but why was I barred from taking part like others?” fumed Bev.

She said it was high time that Ginimbi’s people revise their adjudication process which was marred with controversy.

“Of course we can’t tell Ginimbi what to do with his money but at least there has to be transparency.

“If he feels there is no talent in Zimbabwe, its fine but I wouldn’t agree with that notion.

“What I demand from him is that there has to be transparency otherwise the contest will lose its meaning.

Bev has over the years showed her versatility as a dancer having won in such contest both locally and beyond our borders. H-Metro