A critically ill Chitungwiza man is living on the street as a result of an ongoing row with his younger sibling over their deceased parents’ house in Unti J, Chitungwiza. 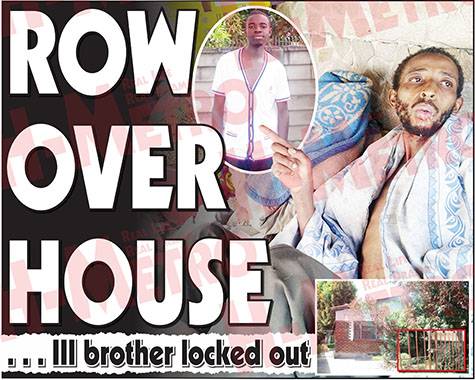 The 38-year-old Intergrate Soroti who is a critical diabetes patient was chased out of his rented apartment and is living outside his late parents’ home with his wife and four minor children.

Intergrate’s brother Hondo is said to have declared war on his sibling and has refused to give him shelter since Monday.

Intergrate told H-Metro that when he returned home, his brother refused to let them into the house and told him that he and his wife aren’t his relatives, the house is his and there’s nothing he can do about it.

“He told me that my wife and I aren’t his relatives, hapana zvamunondibatsira nazvo, the Government, the police cannot do anything to me because the house is mine, because I am the lawful owner of this house,” he said.

Initially, Integrate and his wife Loice Josias, 32, were living at his parents’ house, and when his mother passed away in November last year, his brother Hondo secretly looked for a place for them to stay.

“He looked for an apartment for me without my knowledge when I was admitted in hospital, he then moved my belongings to that house without my knowledge, and when my wife returned from the hospital visit, and he took her to the new house and told her that he would be paying the rentals, just to get rid of me.

“This past weekend the landlady told me to move out because the rentals weren’t being paid for the last three months, she took our things out, and I tried calling him in vain,” said Intergrate.

His wife Loice said their former neighbours at the rented apartment then organised transport for them to be moved to their family home.

“Zvinhu zvaburitswa panze, vavakidzani vedu vakazobatanidza mari so that we could get transport to bring us back home, when we got home, we knocked the gate until they had no choice but to leave us outside because my husband’s brother was ignoring our knocks.

“He hasn’t opened the gate ever since and we are just sleeping outside with his bedridden brother,” she said.

Hondo has been seen several times leaving his house through the back by jumping the precast wall and hasn’t been using the main gate ever since his brother and his family moved there.

Hondo’s phone was unreachable when H-Metro visited their residence but was reliably informed that he had been seen jumping the wall getting in prior to our arrival.

As soon as the news team left, Hondo threw a letter to the neighbours who live next to his house and in the letter, he said he was grieving his mother’s death and is bitter over how his brother treated their mother when she was alive.

In his letter he also said, the war, just as his name, is infinity as he is selling the house soon after the lockdown and it will end when he dies. H-Metro

Coronavirus: Africa could be next epicentre, WHO warns