It was that year when an “earthquake” hit the Premier Soccer League. 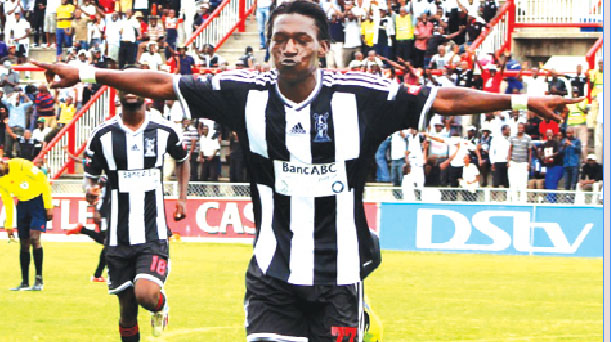 The year when a virtually unknown striker called Evans “Earthquake” Gwekwerere stormed onto the scene and set tongues wagging with his goal-scoring prowess.

After only 10 games, the Dynamos faithful had already composed a song for him entitled “Gwekwerere Bhora!”

By mid-season of that year, Gwekwerere had earned himself a lucrative move to South African Premiership side Moroka Swallows.

However, the year 2006 actually belonged to Bulawayo giants Highlanders.

Powered by an emerging star, Ralph Matema, Bosso, under the guidance of Methembe Ndlovu, romped to their ninth league title.

And just like Gwekwerere, Matema also earned himself the nickname “Banolila”, off a popular song by famous Bulawayo musician Solomon Skuza.

That was the last time Highlanders were to lift the championship.

Then 23 years old, Matema jointly won the 2006 Premiership Golden Boot with Railstars’ Master Masitara after they scored 12 goals each.

Railstars were, however, relegated alongside Zimbabwe Saints and Shabanie Mine at the end of that season.

While the bulk of those players have all retired from the game, with some like Masuku now into full-time coaching, Matema is still kicking on.

Now 37, Matema is still playing in the top-flight, 17 years after making his Premiership debut with the now-defunct Kambuzuma United in 2003, before switching to Highlanders in July 2004.

He recently signed for Triangle following an impressive stint with Yadah Stars, where he was the club’s top scorer with 12 goals in the 2019 season.

“It is all about discipline, respect for coaches and passion for the game I love most,” Matema says.

Matema claims that his best football moments were at Highlanders and he still has a special place for Bosso in his heart.

His heart bleeds for Bosso, who are yet to win the league title in 14 years.

“I always think of that year, 2006. Bosso is where I enjoyed the best moments in my football career, the fans were amazing. The pinnacle was when we lifted the title and I was the league’s top scorer,” he reminisced.

“It is sad that a big institution like Bosso has gone for such a long time without winning the league title. I guess it could be because of lack of funds to get and retain quality players. I feel sad for Bosso.’’

After that trailblazing 2006 season, he was snapped up by South African giants Orlando Pirates.

He spent eight seasons in South Africa before returning home to rejoin Highlanders.

Yadah Stars then came searching for his services at the beginning of the 2018 season and now Triangle are itching to have Matema’s services.

Triangle coach Taurai Mangwiro explained why he went for a 37-year-old striker when his team has upcoming forwards like former national Under-20 star Delic Murimba.

“He (Matema) is a proven goalscorer, you have seen the kind of work he has done over the years. Even if his team is not performing that well, you still see him on the goal-scoring charts.

“That is what prompted us to get him,” said Mangwiro.

“Remember, the most reliable goal scorer we had was coming from deep inside midfield, that is Ralph Kawondera, so we thought after he left, we needed someone who can score goals from an advanced position.

“Matema is one player I have yearned to manage and it is good that we have managed to bring him on board.

“We pray that he delivers. It is not just him; it is all the guys we brought here. We hope they quickly settle and deliver for us.

“Matema reminds me of Lameck Nhamo, when I came on board, he was some extraordinary player for the team and unfortunately, he again was snapped up by FC Platinum, who have also taken Ralph Kawondera.

“Over the years, I have seen my teams creating five or six good chances every game but sometimes we fail to put away even one of those chances.

“But with Matema, he is prolific. The other thing is I have three very young strikers — Delic Murimba, Norest Charumbira and Patrick Magegedhla — and I feel the experience that Matema and Allan Tavarwisa have will go a long way in helping these youngsters.

“We pray Matema serves us well and we will enjoy his goals,” said Mangwiro.

“Ralph is a grinder, very disciplined and someone who can single-handedly lead a team to victory.

“You just need to know how to manage him, given his age. He needs more time to rest so that he recovers to give the coach what he wants on match day.

“He also offers his advice, he is someone who can even opt to be benched if it is for the benefit of the team on that particular day.

“I will definitely miss this guy,” said Mangombe.

The coach who gave Matema his first Premiership taste, Droment Chirova, is not surprised with the striker’s prolonged career.

It was Chirova who introduced Matema at Kambuzuma United in 2003, albeit as a left-back, and the veteran coach has followed his protégé’s career with keen interest over the years.

Chirova, however, immediately noticed Matema’s eye for goal and quickly converted the player to a striker.

“I am proud that he came through my hands. Even up to now, I am still with him in spirit wherever he is playing,” said Chirova.

“Matema was unique, he was cool and humble on and off the pitch. He was a fighter, a utility player who could change the game situation with one move.

“He was a player who wanted to overlap from the wing-back, coming up with good deliveries and scoring goals. That is why I pushed him upfront,” said Chirova. Sunday Mail

Betty Makoni shares personal account of how she battled coronavirus

How the spread of coronavirus is testing Africa