CHAOTIC scenes were witnessed at the market place in Bulawayo yesterday as it was teeming with people, mostly vendors who jostled to buy fresh produce.

It took police and soldiers to maintain law and order as people wrestled each other during the commotion, which was witnessed by a Chronicle news crew.

Long winding queues were the order of the day as people from all walks of life thronged various fruit and vegetable shops. In some shops, elderly persons could be seen pleading with shop employees to get first preference.

Anti-riot police and soldiers kept a close eye as they continually monitored the potentially volatile situation characterised by an exchange of harsh words, particularly from vendors who accused each other of attempting to jump queues during the melee.

Market places had been closed when the lockdown came into effect last week on Monday but reopened following a directive by President Mnangagwa that farmers should bring their produce to the markets during the lockdown period without hindrance, so as to feed the nation.

When a Chronicle news crew visited selected fruit and vegetable suppliers, security personnel comprising ZRP and ZNA members were having a torrid time as they tried to control long winding queues punctuated by chaotic scenes as people failed to maintain social distancing.

People who spoke to Chronicle were generally excited following the decision by Government to reopen the market place.

“The reopening of the market is good news for us considering that unscrupulous traders were capitalising on the situation to charge exorbitant prices for basic commodities like tomatoes and vegetables,” said Ms Nomatter Ndlovu. 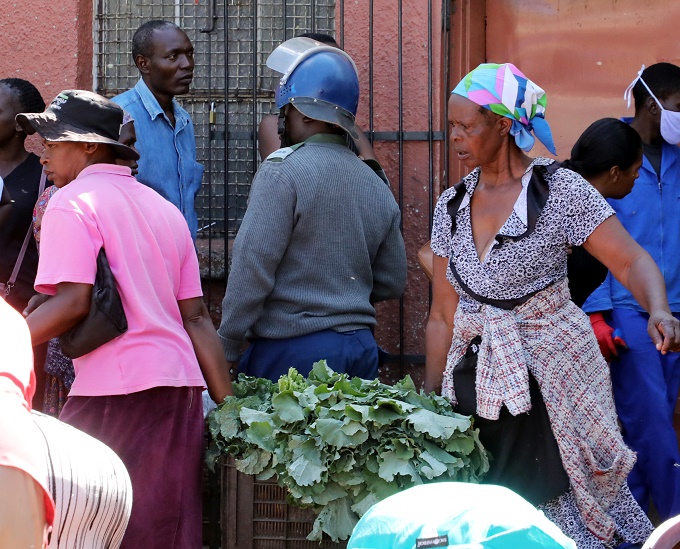 A Chronicle news crew observed that although shop attendants were hand sanitising customers at the entrance, hygienic standards were not being maintained as evidenced by rotten tomatoes, vegetables and banana peels strewn all over the area.

“I came early in the morning and joined the queue to buy tomatoes for resale. There was commotion as everyone jostled to buy. Police and soldiers really assisted in maintaining order although the principle of social distancing isn’t practicable,” said Zaniah Sibanda of Pumula East.

Another resident, Mr Ronald Sibanda said the elderly were not getting preferential treatment in terms of queues.

“I am here intending to buy ginger and garlic, which I use for health purposes, but now am forced to queue despite my old age and with the issue of Corona virus, we are more susceptible, especially taking into consideration that the issue of social distancing is not being practised in such a public place,” he said.

A vendor, Ms Dorcas Rwodzi said there was a need for shop owners to maintain hygienic standards in light of Covid-19.

A shop attendant at Fresh Route Fruit and Vegetables, who declined to be named said they are allowing a limited number of customers at a given time.

“Customers are getting inside the shops in small numbers as we’re trying to limit the numbers and maintaining social distancing as part of measures to curb the spread of Covid-19,” he said

The Chronicle news crew also visited Willsgrove, Sizani Fruit and Vegetables and Lee Market and noticed that there were queues with people failing to adhere to the principle of social distancing.

In Gwanda and Gweru, market places were still closed yesterday.

In Victoria Falls, vegetable vendors were back to their vending stalls.

A snap survey around the markets showed that some vendors had started selling outside the stalls.

Some tippy taps, which are hand washing devices made up of a water container suspended on a horizontal pole and tied to a pedal using a string which when tipped by foot, releases water for one to wash hands, had been set up at the markets’ entry points.

“Yes we met with the residents association and the municipality was tasked to sanitise the stalls while vendors themselves must have sanitisers at any given time.

“The vendors are not supposed to go to the market at once but will give each other chances by way of rotating so that the stalls are not congested,” said Dr Mvura.

“While essential service providers like shops remained open, vegetable markets are no exception as they provide similar services which are even more affordable to the ordinary citizens.

“We have engaged authorities and I therefore urge vegetable vendors to return to their stalls.

“However, we are all reminded to guard against the spread of Covid-19 and sell only on designated vegetable markets, provide sanitary material and maintain social distancing between stalls and customers,” he said. The Chronicle

Chenayi Mutambasere: How COVID-19 caught us with our masks half down