Prominent Nigerian actress Funke Akindele has been widely criticised for holding a party during the lockdown imposed to tackle coronavirus.

The party in her Lagos mansion was held to celebrate the birthday of her husband, producer JJC Skillz.

Akindele has appeared in a Nigeria Centre for Disease Control video to raise awareness about coronavirus.

She has defended the party, saying that everyone who was there had been living in her house for two weeks. 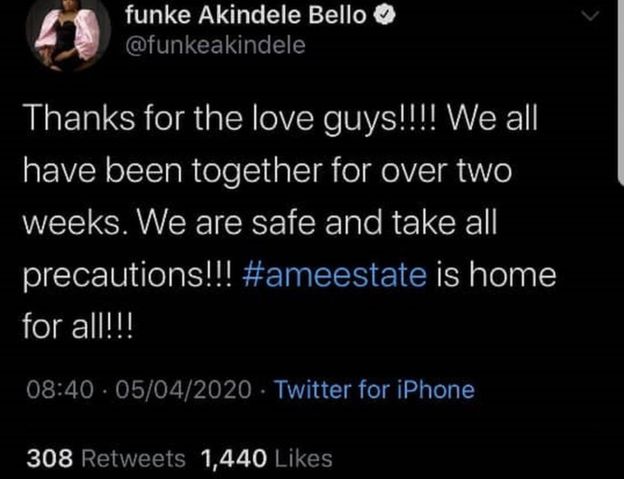 Under the lockdown, all gatherings of more than 25 people have been banned in Lagos, Nigeria’s biggest city, which has an estimated population of about 20 million people.

It is not clear from the video, posted online by JJC Skillz, whether the party exceeded that limit – but it has nevertheless been widely condemned for setting the wrong example.

Those seen in the video include singer Naira Marley and actress Eniola Badmus, and some Nigerians have questioned whether they have been living with Akindele and her husband.

The House Party Funke Akindele and her Husband JJCskillz did with the likes of Naira Marley, Eniola Badmus.. why this during this total lockdown? 😩💔🤦🏽‍♀️ pic.twitter.com/fNVMEIgZHd

Akindele is one of Nigeria’s best-known actresses and came to prominence for her series Jenifa’s Diary, broadcast on national TV.

A lockdown was imposed in Lagos, the neighbouring state of Ogun and the capital, Abuja, last week in order to halt the spread of the virus.

Nigeria has confirmed 224 cases of coronavirus so far, with five deaths and 27 people discharged. BBC News

Linking coronavirus and 5G is “complete rubbish” and biologically impossible