CAF has rejected Zimbabwe’s appeal for re-inspection of local stadiums and have the Warriors play their 2021 Afcon qualifier against Algeria at home, insisting that Zifa should inform them about the foreign venue that they have settled for. 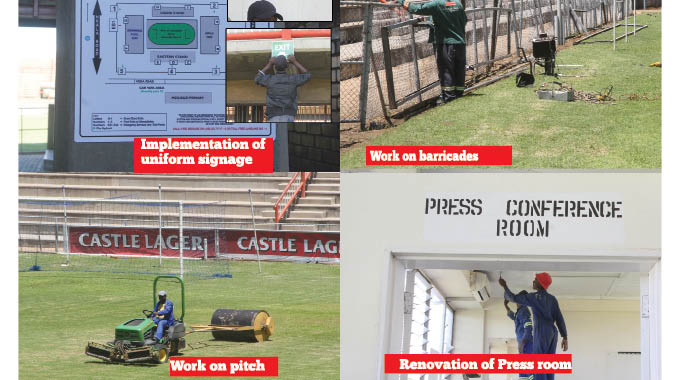 Zifa are on record saying they had engaged their South African counterparts over the possible hosting of Algeria in that country. Reports say Zifa had identified Johannesburg’s Dobsonville Stadium as a possible venue.

Impeccable sources at Zifa said the national football association was “hit hard” by the sad development and will be making an announcement in the “coming days” as they consult on the next step.

Frantic efforts are being made by Government and the Bulawayo City Council to spruce up Barbourfields Stadium, with the hope of getting a waiver from Caf.

“We got some disturbing news from Caf that our appeal for re-inspection of Barbourfields Stadium wasn’t successful and they want us to provide the venue outside Zimbabwe for the match against Algeria.

“Chances of convincing Caf now look very minimal but not all hope is lost. Consultations are still on going because there’s a feeling that since there was a Government guarantee, evidenced by work that is being done at Barbourfields Stadium, maybe we may get some reprieve,” said the source.

For the first time in the history of Zimbabwean football, the Warriors will play competitive home games on foreign soil.

Barbourfields had provisionally been cleared to host international matches during an inspection held in November last year when the National Sports Stadium and Mandava Stadium were condemned.

The Bulawayo Stadium went on to play host to FC Platinum’s Caf Champions League matches, World Cup qualifiers for the women’s Under-17 and Under-20 teams.

Zifa had been expected to send pictorial evidence to Caf today, with the hope of convincing the continental body to rescind its earlier decision to bar Barbourfields Stadium to host the 2021 Afcon qualifier between Warriors and Algeria.

Bulawayo City Council and employees from the Local Government and Public Works worked throughout the weekend and by 8pm yesterday, they were still at Barbourfields Stadium trying to get ready for today’s photoshoot.

Delivery of material that has been procured for the uplift has been delivered, with some expected today.

Engineers from the local authority have also fixed the required bulbs for the floodlights as they work on getting lux certificate.

Signage at the stadium has been done.

Contacted for comment last night, Zifa communications manager Xolisani Gwesela professed ignorance about Caf’s response, saying he would be in a better position to comment today after consulting his bosses.

On Sunday, Zifa issued a statement saying they are still engaging Caf and no binding decision has been arrived at.

They were hopeful that Caf will grant Zimbabwe its “sovereignty” to play international home matches locally. The Chronicle