WWE: The Rock’s daughter, Simone Johnson, will step into the ring

The daughter of wrestling legend, Dwayne “The Rock” Johnson, is set to continue her family’s legacy. 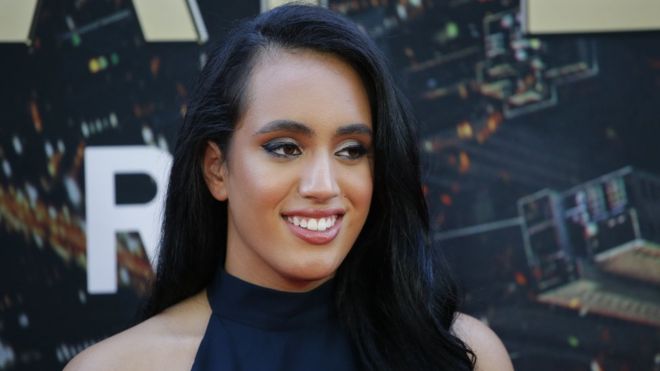 Simone Johnson, 18, has started training with WWE – following in the footsteps not just of her dad but her grandad, and her great-grandad too.

She will be the first fourth-generation superstar in WWE history.

“It means the world to me,” Simone said in a statement. “To know that my family has such a personal connection to wrestling is really special to me and I feel grateful to have the opportunity, not only to wrestle, but to carry on that legacy.”

Her training has already started alongside other future wrestling stars at the WWE Performance Center in Orlando, Florida.

WWE’s Roman Reigns gives up title due to leukaemia

For the little girl who fell in love with wrestling & was determined to make this dream a reality – this is for you. I’m beyond thankful for this opportunity & ready to get after it.

Let’s do this. @WWE @WWENXT pic.twitter.com/5lSKbWnHf7

“Simone Johnson’s unbridled passion and incredible drive has earned her a coveted spot training with the elite athletes from around the world at the WWE Performance Centre,” said Paul “Triple H” Levesque, executive vice president.

Following the announcement, The Rock posted on his Instagram: “Dreams ain’t just for dreamers… So proud. Live your dream. Let’s work.”

He was part of the first ever black tag team to win a WWE championship.

Although she might feel like she has a lot to live up to – her parents are keen to make sure she feels no pressure.

In his post, The Rock wrote that Simone’s journey “will always be [hers] to create, earn & own”.

Her mum, Dany Garcia, echoed that view, saying: “Your future will be uniquely yours to earn.”

It’s been the blessing of my life to watch you grow @simoneGJohnson & while the legacy of the family may be your platform, your future will be uniquely yours to earn. Congrats my Love❤️on living your dream & welcome to @WWENXT @wwe!! #4thGenerationSuperstar pic.twitter.com/YgtpDWPzdR

WWE’s Roman Reigns gives up title due to leukaemia