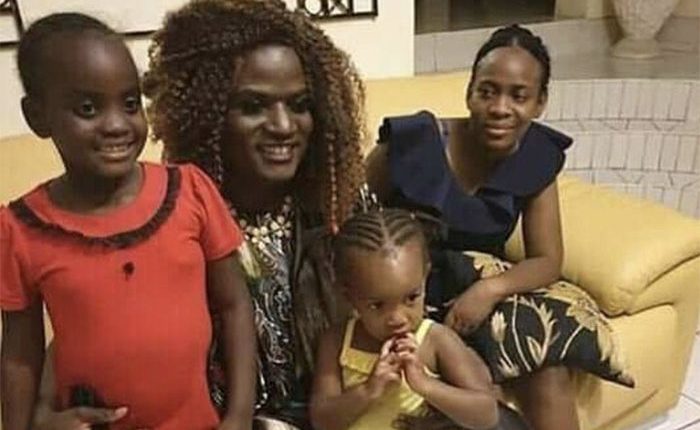 Can someone please present gospel musician, Prophet Freddy, with his award for Most controversial gospel musician as he has already hogged the limelight again after appearing as a drag queen on his Zvakwana music video.

Last year, the prophet shot a video for the song Ndekeda which featured Tocky Vibes and it triggered a social media frenzy as he appeared courting ladies of the night. Some denounced the clergyman’s actions, but he simply said it was artistic creativity.

Now, a few months later, he is talk of the town again as some have bashed him for dressing like a woman on Zvakwana, labelling him a drag queen.

Some questioned who was behind the concept of the video which addresses the issue of gender-based violence. Among those who were seemingly against the concept was filmmaker, Nico Abote, who quizzed:

“Music videos: As an artiste, do you come up with your own concept or you leave it to the creative director or both? The prophet does look like a drag queen definitely. I wonder whose concept it was.”

The man behind the video, award-winning Vusa Blaqs did not waste time and revealed himself. Blaqs simply said he deliberately got the prophet to dress that way, adding that Zimbabweans need to move with the times and stop being judgmental.

“It was my concept. We agreed on it. I wanted to ruffle feathers and I managed to do that. As a filmmaker yourself, I’m surprised at how you don’t see the level of skill, guts and technical ability it took for us to pull that off.

“Bottom line, I didn’t enter this industry to play nice with people’s perceptions of what art is. Whether it works or not is not my problem. I had a blast working on this and I’m absolutely pleased with the results,” commented Blaqs.

Abote responded saying: “. . . my take here is the concept has been done and nothing fresh here, but a bit shocking in trying to understand the meaning of it.”

Blaqs added that it was amazing how Zimbabweans are ok with Tyler Perry acting as a woman on Madea’s role, but then frown when their own does the same. However, judging by the comments on the video on YouTube, it definitely is a hit as it has mostly positive comments. As of yesterday, the video had over 100 000 views and close to 400 comments.

Women’s rights activist, Betty Makoni, was among those who hailed prophet Freddy for his role.

“Very important topic. Well done for playing both roles especially putting men in the shoes of women. By such artistic wisdom, you drew all to this video to explore further and in so doing, got the message out there. Powerful and mature lyrics.

“Domestic violence devastates lives and you managed to bring many to this hidden harm. Well done Pastor. Strong message is on empathy — if you were in the feet of women in domestic violence — how would you feel,” commented Makoni on the video.

“kkkkk Prophet, your acting is on point and I love how you played both roles of the man and woman,” commented one Pamela Mpilo.

Some event encouraged Prophet Freddy to consider taking up acting. To show the traction the video has, a #ZwakanaChallenge has evolved on social media and has seen the likes of controversial Prophet Passion Java and social media comedian Mai Titi joining in a follow up interview yesterday, Prophet Freddy said:

“The concept of the song came after the realisation that a lot of men regard their women as their property after paying lobola. Even in situations where women want safe sex, men refuse and name call them”.

Above all, Prophet Freddy’s creativity has been hailed by many and it is yet to be seen what will come out of his forthcoming album which he is working on. He seems to be on the right track as his songs topped the charts on radio stations last year.

Among the songs are Bag which was number one on National FM while Kastep Kenyasha was number six on ZBCtv’s Top 50 music videos. Munyama Wegonzo was number three on Diamond FM’s Super 50. The Chronicle

Luke-ing the Beast in the Eye… Command sweeping: Now is the time for massive people power