Gospel musician, Kuda Mutsvene, has been accused of destroying a UK based couple’s marriage. 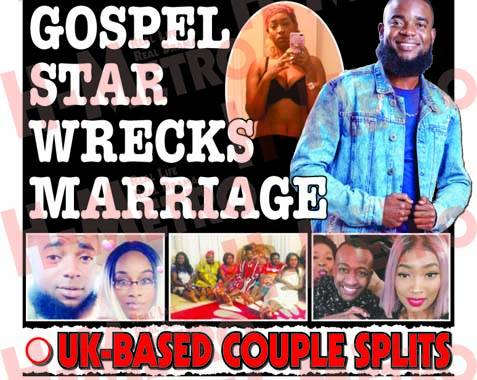 The Ndinonzwa Mazwi singer is alleged to have destroyed a six-year marriage of one Calvin Marevesa and Lynette Nyamapfeka who are now on separation.

Marevesa got hold of the two’s affair after he found love WhatsApp messages between his wife and Mutsvene.

In their conversations are also semi-nude pictures the two sent to each other.

H-Metro is also in possession of the messages.

“I came to realise my wife was having an affair with Kuda after I discovered messages in her phone.

“Their relationship started some time last year in November and they are still communicating.

“My wife came to Zimbabwe last year in December and that is when they started to sleep with each other.

“When I asked them both they initially denied because they didn’t know I already knew and was in possession of the evidence.

“My wife said they were only friends but when I showed her the evidence complete with money transactions sent to Kuda, voice notes, picture and videos she admitted.

“The money was for his upkeep as he was struggling to make money from his music and also to use to support his drug habits,” said Marevesa.

“She is also in another relationship with another guy here in the UK that Kuda doesn’t know about, so she is playing the two.”

Contacted for comment, Kuda, who said he was at his in-laws house paying bride price for his girlfriend, said he was not involved in any affair with Marevesa’wife.

“I had a UK tour coming up and the husband said they wanted to dress me for the show, I think the guy is a designer.

“The wife then took my number from his phone and he knew I was communicating with her, I was never in a relationship with her.

“When I got to know about this couple, I think vanga vakuto netsana and the father of Calvin’s wife even told me I was not the problem but their daughter was,” he said.

Asked about the messages and semi nudes pictures, he said:

“Pane achatora picture here mukore uno? I don’t know if those pictures are genuine because they don’t show it’s me.”

In an interview, Nyamapfeka said:

“This is ridiculous and absurd, anyone’s ex can come up with lies just to ruin someone.

“I have never dated Kuda Mutsvene this is an absolute lie.”

Asked about the semi-nude pictures in their conversations with Kuda, she said:

“I am not going to comment further, I didn’t date Kuda, fullstop.” H-Metro