At the time of his death, Phineas Ferani Sithole was the earliest (and likely only) surviving leader of a Zimbabwean liberation movement. 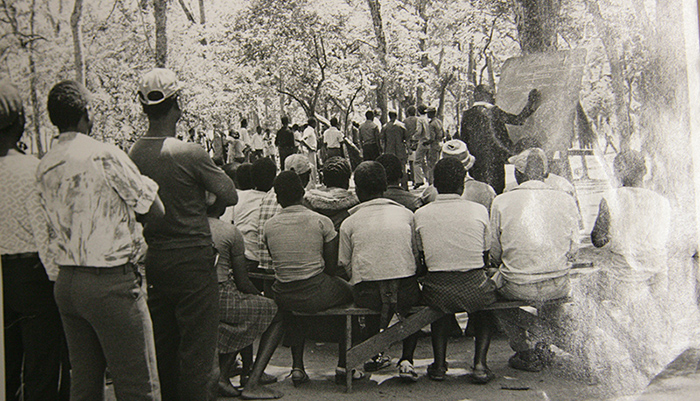 Sithole, a prominent trade unionist and pan-African politician from the 1960s to 1980s, briefly served as a MP in the short-lived Zimbabwe-Rhodesia Government in the late 1970s.

For a decade following independence in 1980, he opposed Robert Mugabe’s efforts to create a one-party state.  He was a former President of the African Trade Union Congress (ATUC) and a close colleague of prominent nationalist leaders like Jason Z. Moyo and Reverend Ndabaningi Sithole.

In his memoir, former Prime Minister Morgan Tsvangirai stated that his attendance at an address by Sithole in 1973 inspired him to become a labour activist. Sithole fell into obscurity after abandoning party politics in the early 1990s.

Sithole was born in 1931 in Selukwe, Southern Rhodesia (now Shurugwi, Zimbabwe).  His father was employed as a miner at Shabani Mines.  Sithole was educated at Mzingwane Secondary School and was trained as a teacher at Solusi Mission.

His political consciousness was awakened in April 1947 when he was forced to join a greeting party for King George VI and the Royal Family during their visit to Cecil Rhodes’ grave.

In 1958, as political tensions across Africa and in Southern Rhodesia were escalating, Sithole switched careers, abandoning teaching and joining a Bulawayo blanket factory, Consolidated Textiles, as an accounts clerk.

He quickly became active in the Textile and Allied Workers’ Union. One of Sithole’s first engagements as a labour activist was to successfully lobby for a minimum wage.  When the Southern Rhodesian government declared an emergency in 1959 and banned the nationalist movement, he was one of several hundred figures detained without charge.

In 1962, he became involved in party politics as the founding Vice-President of the short-lived Pan-African Socialist Union (PASU). That October he travelled to New York with party president Paul Mushonga.  In an address before the United Nations, Sithole condemned the Rhodesian government as “a vicious minority settler team bent on perpetuating white supremacy.”

Upon his return to Rhodesia, customs officials at Salisbury Airport delayed him for approximately 90 minutes, confiscating many of his documents.  He was subsequently charged with possessing subversive propaganda and received a 12-month jail term.

Following Mushonga’s death in a car accident that December, Sithole became PASU’s Acting President.  In early 1963, alongside Wiseman Zengeni (who subsequently became one of only three non-ZANU-PF candidates returned at the 1990 parliamentary election) he toured several west African capitals on behalf of the party.  Later that year he brought PASU into the fold of the newly created Zimbabwe African National Union under the leadership of Reverend Sithole.

Following this merger, he reverted to leadership roles in trade union circles and from which he continued to vigorously oppose white minority rule.  As the President of the ATUC, he leveraged his role as a spokesperson for 50,000 black industrial workers to advance the nationalist cause.

Sithole spoke out against the new Rhodesian constitution and Prime Minister Ian Smith’s declaration of a republic in 1970.  He resoundingly condemned Rhodesia’s ultimately unsuccessful efforts to reach an independence settlement in early 1972 with the British.

Phineas continued to support Reverend Sithole after the latter was ousted as ZANU’s leader in the mid-1970s.  He became the National Chairman of the Reverend’s ZANU wing, ZANU-Ndonga, in 1977, a position he held for over a decade.

During the short-lived internal settlement between the minority settler government and several black groups, Phineas served in the 1979 Zimbabwe-Rhodesia Parliament, representing Matabeleland North.

After independence, he frequently clashed with the new government of Robert Mugabe.  He condemned widespread government perpetrated violence in Matabeleland, the Gukurahundi atrocities of the early 1980s, as “a pretext” to crush opposition.

In 1983 he was arrested by the Mugabe government and subsequently imprisoned for over a year.  He abandoned party politics following the 1990 election campaign after he fared poorly in his campaign for the Mpopoma parliamentary seat and had a falling out with Reverend Sithole.

Sithole passed away on 27 October in Bulawayo five days after his 88th birthday.  He is survived by his wife and many children and grandchildren.  He resided in Cowdray Park, Bulawayo, with one of his daughters.

Brooks Marmon is a PhD student at the University of Edinburgh. Follow him @AfricaInDC.

Job Sikhala: I dare Mudenda to try it