UK based socialite Olinda Chapel has launched a scathing attack on her ‘evil’ estranged husband Tytan Nkomo while praising her ex-husband, rapper Desmond ‘Stunner’ Chideme, as an angel.

She posted a status saying “ndopaunoona kuti Stunner Da Des waiva ngirozi zvake #evil”. This translates to “you can now see that Stunner was an angel” with hashtag #evil directed at Tytan.

In another live video Olinda claimed the level of “evilness” she has endured from Tytan made Stunner look like an angel. She accused Tytan of only marrying her to secure a visa to live in the UK. 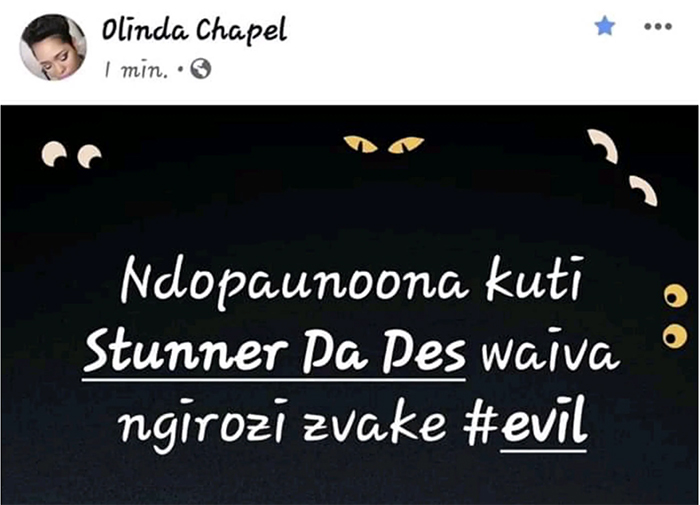 She said she was no longer free to express herself freely because all her videos on social media where being collected and being used against her in the courts.

Olinda shot to prominence after her meltdown LIVE on social media when she broke up and eventually ended her marriage with Stunner.

She eventually moved on and married Tytan last year in March but the marriage hit rocky patches with Olinda claiming the singer was a serial bed-hopper and had slept with her best friend.

In a statement sent to Nehanda Radio in August this year Tytan said;

“I will be able to talk fully about the full details of the reason why our relationship has ended after the completion of police investigations and various legal proceedings. I am receiving support from a strong legal team and domestic abuse services.

“I would kindly ask that my family, friends and the public bear with me as I go through a very challenging and trying season in my life. Please keep Olinda, myself and Nandi in your prayers.”

That same week Olinda hit back with an Instagram LIVE video telling Tytan not to talk about ‘praying for them” because he did not care about her and the child. She also accused Tytan of lying about domestic abuse because “you want to tick the boxes just to retain your visa.”

Olinda said the ‘domestic violence’ Tytan is referring is the one time they grappled over a computer. She expressed regret having a baby (Nandi) with Tytan saying the baby was only three months old and already going through the drama manufactured by her father. Nehanda Radio