Heavyweight boxer Tyson Fury was attacked during training for his World Wrestling Entertainment debut on October 31. 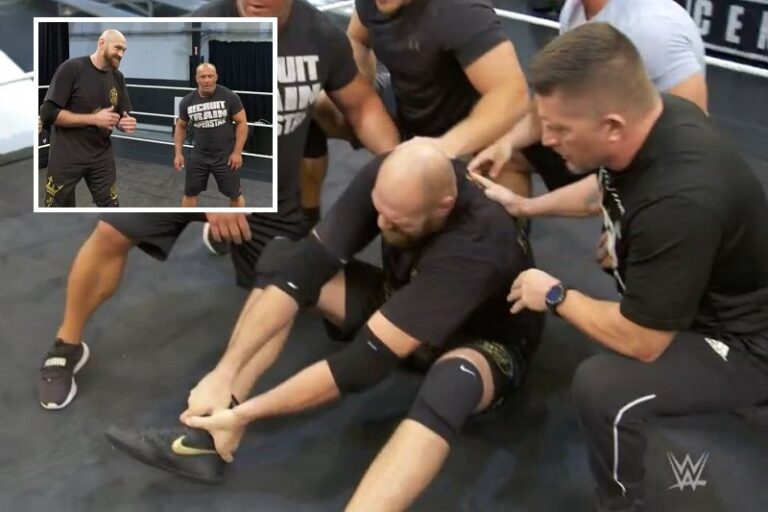 Fury is currently in preparations for his Pay-Per-View debut at Crown Jewel after crossing over to WWE recently.

As the 30 year-old was putting a shift in at WWE Performance Center, Fury was set upon by fierce rival Braun Strowman.

Left with a possibly injured ankle, Fury is now a fitness worry.

There are just eight days to go until the Saudi Arabia battle.

Anthony Joshua knocks out Kubrat Pulev to raise hope of…

The scare comes just three days after promoter Frank Warren told Fury to, ‘protect himself at all times’ whilst wrestling.

A massive rematch with Deontay Wilder hangs in the balance for February 22, 2020.

Already cut in his previous fight with Otto Wallin, Fury was doubtful before his stint in WWE. Add to that the fact Warren wasn’t informed about Fury’s intentions to battle Strowman, and the UK Hall of Famer could be tearing his hair out.

Assuring Warren with a reply of, ‘Will do Frank’ won’t have made the events any easier to swallow. Fury now faces a race against time to be fully 100%.

WWE commented on the matter by saying, “In preparation for his in-ring debut at WWE Crown Jewel, Fury has been deep in training at the WWE Performance Center looking to perfect his new craft. In the middle of today’s training session, Braun Strowman dished out a rude lesson of his own. He blindsided ‘The Gypsy King’ with a vicious hit.

“The attack left the lineal heavyweight champion clearly hobbled. Fury was fuming over the surprise assault by The Monster Among Men.

“Will Fury be fully healed for WWE Crown Jewel or will the attack tip the scales in the direction of the mighty Strowman?

“Stay tuned to WWE digital platforms as the story continues to develop.”

Mike Tyson and Floyd Mayweather are among previous world champion boxers to participate in the company. World Boxing News

Anthony Joshua to Tyson Fury: ‘You’ve let boxing down. You lied to the…