In a bizarre incident that has left villagers in Mkuze Village under Chief Mkoka in Gokwe South shell-shocked, women at a funeral wake miraculously woke up without their panties last week. 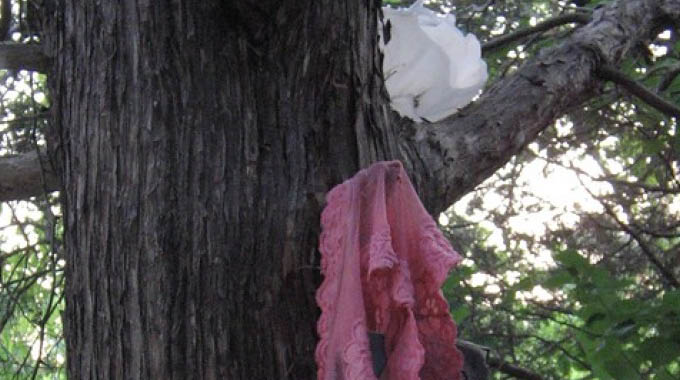 The undergarments were later found hanging on a tree near the homestead.

Chief Mkoka confirmed the incident saying the strange incident had sent tongues wagging in the village.

“There was a funeral in the village at Twoboy Ncube’s homestead. As usual villagers went to the funeral wake to comfort the Ncube family and to help with all the other necessary chores.

“It is said that when they woke up in the morning, most women discovered that they had been stripped of their undergarments while they were asleep,” said Chief Mkoka.

He said the women were later asked to identify their panties from the tree.

“Most of them were able to positively identify their panties though they were scared to take them as they suspected witchcraft,” said Chief Mkoka.

Chief Mkoka said he received the report on the incident from Headman Mkuze on the same day seeking permission to invite traditional healers and tsikamutandas and seek answers.

“I received a report about the strange incident last week and we are trying to seek answers from spirit mediums and local prophets in our area. They are telling us that the ancestral spirits are the ones behind the whole issue.

“The spirit mediums were summoned and they performed their rituals. They didn’t say anything though after completing rituals,” he said.

This incident is not the first of its kind in Gokwe.

In September 2014, a similar incident happened in Chibarirwa and Demawatema villages in Gokwe South. In the same year Saviors Nyenyezwa of Gokwe was found in possession of 13 women’s panties and a black mamba during a cleansing ceremony.

In July 2012, a 62-year-old man from Charisekera, under Chief Njelele came out and claimed ownership of a goblin which had been terrorising women in his village by taking off their panties at night while they were asleep.

The man, Lumeck Ncube, made the startling revelations at a cleansing ceremony in the village. B-Metro

‘All four kids not his’ . . . Woman in shock cheating revelation with hubby’s pal