Leo says ‘Mugabe’s body can last a month outside mortuary’…. dodges question on why different caskets have been used

The body of former President Robert Mugabe was embalmed to last several weeks outside a mortuary and could still be at the family home for days to come, a family spokesman has said.

Mugabe died in Singapore on September 6 and his mausoleum expected to be ready in roughly three weeks.

Initially, the Mugabe family announced the body would be preserved at a private mortuary after public parades in the capital, Harare, and the former leader’s rural home, Zvimba.

It, however, emerged on Monday that it was still at the family residence in Harare.

“When I left Harare on Thursday (last week after returning with the body from Zvimba), the general understanding was that the body would be taken to a mortuary or a place to be preserved.

“However, I have since been told that the preservation process was done in Singapore and the body can last for a month without going to the mortuary.

“This is something I believe is good as there are no extra expenses.” 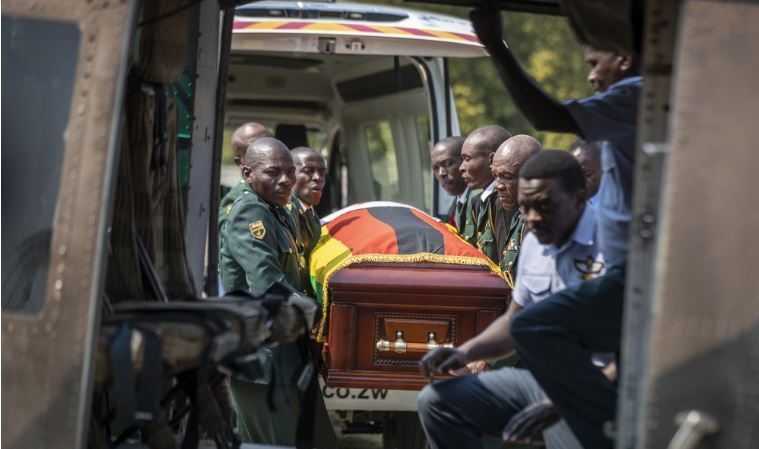 He went on: “If a chief were to be buried in a cave, for instance, they would have to be dried up first. Can you imagine how long it would take for the person to dry up? It is not a day’s job.

“So, culturally, they would have to spend days with the body. So, I don’t see a problem there myself. But, in any case, the fact is that we are waiting for the mausoleum to be finished. (Therefore), we still have to keep the body.”

Regarding why different caskets have been used, he said, “I cannot answer that particular question. The safety of the corpse was taken into cognisance.”

This week Europe based website Spotlight Zimbabwe claimed Mugabe had already been buried in secret at a mysterious location, in his rural home of Zvimba.

According to a close relative of the Mugabe family, the late veteran politician was laid to rest last week, during a night burial ceremony at a hidden location in Zvimba only known to traditional chiefs, his wife Grace and immediate family.

“The whole thing about a mausoleum construction was a tactical diversion,” said the relative, who also served in Mugabe’s administration at one point.

“The president made it clear that he wanted to be buried in his rural home, and that his body be interred by chiefs in the area, at a location only known to them and his immediate family.

“Yes, there shall be a private event at Heroes Acre in Harare, when the mausoleum is complete, but it’s all going to be symbolic. That is not Mugabe’s final resting place, but as a founding father of our country, it made sense to have a mausoleum built for him on top of the hill at the national shrine.” — ZTN/ Spotlight Zimbabwe