Zimbabwe international Marvelous Nakamba put up a good show for Aston Villa despite losing 3-2 to Arsenal at the Emirates yesterday. 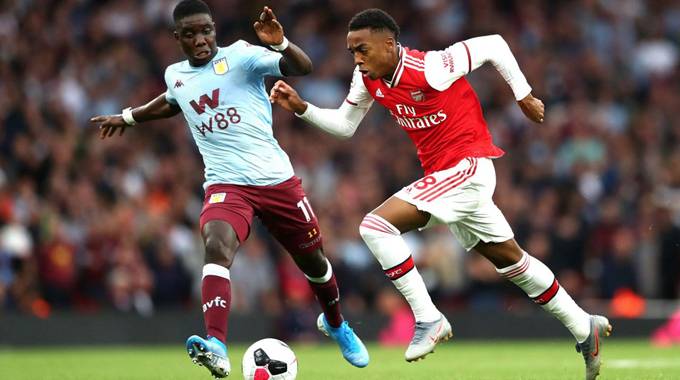 Nakamba, who started for Villa, was impressive managing to provide cover for his defense on a number of occasions.

Nakamba starred for 85 minutes in a grueling encounter and outperformed his opposite Granit Xhaka who had to be substituted for Arsenal.

Villa were the first to find the back of the net when John McGinn scored past Bernd Leno 20 minutes into the game.

Nakamba sneaks in for secret wedding

Arsenal were reduced to 10 men after Ainsely Maitland-Niles received two yellow cards in the first half.

The visitors went to half time leading, but Bjorn Engels fouled Matteo Guendouzi on the hour mark to give away a penalty to The Gunners.

Nicolas Pepe scored his first EPL goal to equalise for the Gunners but 90 seconds later, Villa regained the lead through Wesley who made it 2-1.

Villa failed to hold on to the lead with 10 minutes remaining as Chambers and Aubameyang both scored in the final 10 minutes.

It was, however, Nakamba’s show that could have charmed Zimbabweans who watched the match.

Unlike in his debut against West Ham, Nakamba was clinical in his passing and managed to break some Arsenal attacks.

He also made a crucial block in the box before he was withdrawn five minutes from full time.

It was the Warriors star’s second topflight match having made his debut in a 0-0 draw against West Ham last Monday.

Villa coach Dean Smith was, however, not impressed by his team’s performance.

“We gave three stupid goals away. We’ve planted a foot in the penalty box and I don’t think any player in this league needs much encouragement to go down. They get a penalty and we try and cushion a header in the six-yard box and they pounce and score when it should be going out for a corner.

“We then play a straight pass into midfield, they win it and break. I felt at 1-0 and 2-1, there were periods where we tried to get the next goal but, on the whole, we tried to hold onto the lead rather than extend it. That was the difference, we could have extended the lead and won it comfortably.

“But, for whatever reasons at times in the second half, we retracted and, if you do that against good players they can cause you problems,” said Smith after the match. H-Metro

Nakamba sneaks in for secret wedding