FITTINGLY, it was the defining moment of this feisty old boys’ club showdown at Rufaro yesterday pregnant with many sub-plots. 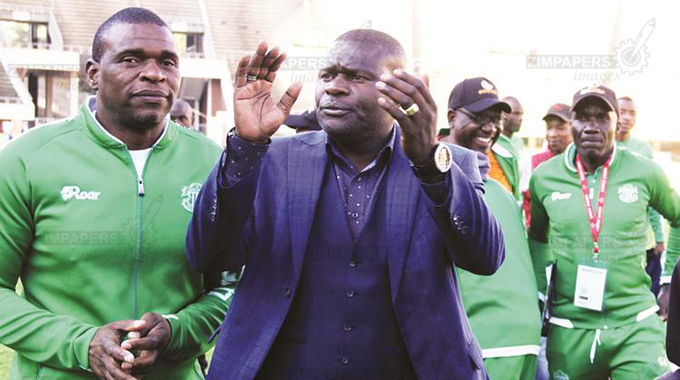 Anything else would have been an injustice to such beauty, the baggage that would have diluted its purity, tainted its majesty and eroded its value.

It’s a pity the television cameras where not there to capture it and store it in the vault where this league’s golden moments are preserved.

Because, it’s such moments of magic, which are now few and far between in the domestic Premiership, which must be replayed, again and again, to show there is still a spark of life in this league.

Manondo, Antipas bag player and coach of the month awards…

CAPS United striker Manondo says “too early to talk of…

To possibly convince those, who have turned their backs on the league, because of its choking mediocrity and the absence of genuine stars to illuminate it, to entertain the idea of coming back to the stadiums.

And, to show that those who still provide it with its regular patronage are not mad people, seduced only by their faith and blinded by their love for their teams, but – now and again – they bear witness to some magical moments.

One that fully deserved to be the one that powered CAPS United back to the top of the Castle Lager Premiership.

The one that helped the Green Machine ‘‘punish’’ Harare City for poaching their entire coaching crew and the one that transformed Rufaro into a cathedral of songs.

A goal that settled this contest, long on sub-plots but generally short on genuine quality, where CAPS United dominated the first half and then spent large parts of the second period in defence mode as their opponents, after the introduction of the lively Peter ‘‘Rio’’ Moyo, took control of midfield.

And, sadly for some, it came after just six minutes, which meant a number of those who ended up inside Rufaro yesterday, probably missed it.

The cross field pass from deep inside the CAPS defence was speculative, at best, but it cut open the Harare City defence and created a small window of opportunity for the Green Machine.

Newman Sianchali, a 32-year-old veteran who has played for Bantu Rovers, Hwange, Bulawayo City and Highlanders, raced to meet it, his expert touch bringing the ball down, while on the charge.

And, without breaking stride, combining both power and precision, he produced a sweet and powerful volley, from distance, with the ball moving in the air and finding its mark in the top corner of the Harare City goal.

It’s very unlikely the domestic Premiership will witness a better goal this year.

This, to a large extent, could also have been the afternoon when caretaker coach, Darlington Dodo, whose promotion to lead the club in the wake of Lloyd Chitembwe’s departure has been a hugely divisive issue at the Green Machine, finally won over some of his fierce critics.

Because, for the first time since he took over the hot seat last month, receiving a baptism of fire in his first game at Ascot where his charges crashed to a 2-4 defeat at the hands of Chapungu, the Green Machine managed a clean sheet in the four league matches he has been the leader.

After conceding eight goals in their last three league matches, including three in their last drawn game against Bulawayo Chiefs, a clean sheet against this battling Harare City yesterday was a huge step forward for Dodo and his players.

Of course, most of the credit for that should go to goalkeeper Prosper Chigumba who, twice in either half, produced excellent reflexes to save free headers, one kept out on the ground in the first half, and the other touched over the bar in the second, on a day his defenders looked vulnerable to high balls swung into their area.

The ageless Method Mwanjali had another fine afternoon, in what is turning out to be a very good season for the veteran, while the skipper, Hardlife Zvirekwi, was probably the best player on display with a composed performance down the right side of his team’s defensive and offensive channel.

The emerging talents of the elusive Tatenda Tumba, the diminutive Harare City winger who kept running rings around the CAPS United defenders, and the impressive 19-year-old Clive Rupiya, who enhanced his growing reputation with another good show for the Green Machine in attack, provided the promise for the future.

Chitembwe, in his first battle against the club where he built his name both as a player and a coach, was given a warm reception by the Green Machine fans just before the match.

After emerging from his technical bench to salute the supporters, for whom he provided three league titles as a player and one as a coach, Chitembwe was given a standing ovation from those sitting on the City End of the stadium which house the CAPS United fans. It became very clear that, despite all the drama created by his sudden departure from the Green Machine, the relationship between the fans, and this legend of their club, remains very strong.

There was another coach in the stadium, Italian gaffer Roberto Landi, who watched the match in the company of CAPS United president Farai Jere.

Landi, who has been in Harare since last Monday, has agreed terms to become the head of technical at the Green Machine, pending the conclusion of the process of him getting a work permit, and the former Liberia national team coach closely followed the drama on the field.

Now, and again, he showed his frustration, when the CAPS United midfielders just pumped the ball forward, rather than playing it on the ground in search of a teammate, and he became more animated when Harare City seized control of the midfield in the second half.

But, the main storyline from yesterday’s game has to be, and will always be, that wonder goal – what a strike, what a beauty, what a decider! The Herald

Manondo, Antipas bag player and coach of the month awards for March