A man drowned in a well on Monday in New Arcadia whilst allegedly trying to retrieve a mobile phone. 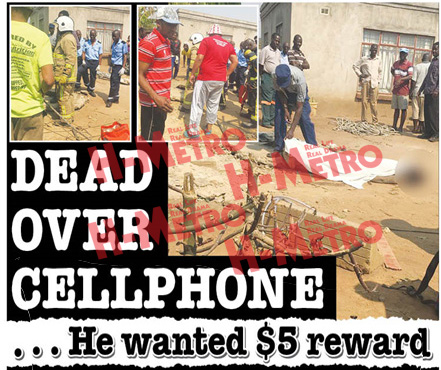 According to the people who witnessed the incident, the man – only identified as Lovemore – had been promised between US$5 to US$10 by the owner of the mobile phone, Wonder Nyapokoto.

Nyapokoto, who resides at No. 41Culverwell Road in New Arcadia as a tenant, claimed he had hired experts who have a know-how in the drilling of wells to retrieve his mobile phone, and denied that he had promised any amount of money to the person who retrieves his cellphone.

“My mobile phone fell into the borehole while I was fetching water.

Girl drowns in swimming pool at Queens Sports Club in…

“I then looked for someone who has the knowledge and skill about drilling and building of wells to recover my phone from the well.

“The guy came and he said he could not retrieve the mobile phone from the well and promised to bring someone who can do the job.

“After five minutes when I had finished talking with the well guy, that is when I heard that there is someone who has fallen into the well.

“That is when I assisted with looking for a crane along Mashwede Road to take the body out of the well,” said Nyapokoto.

In an interview with H-Metro, the young man who was called to retrieve the mobile phone by Nyapokoto, only known as Pride, said he refused to enter the well and he also tried to restrict Lovemore from entering the well.

“I am not an expert in wells as people say. I used to assist my colleague to drill and build wells.

“I refused to get into the well since I realised that the temperature inside the well was high and it could have led to suffocation.

“And the time was not good for me to get inside the well because of the temperature.

“I also realised that we had no equipment to get inside there but Lovemore insisted that he can retrieve the phone.

“As I was leaving the scene that is when I heard some children shouting that someone has fallen into the well,” said Pride. H-Metro