A Zimbabwean woman, apparently on her way to a church service, was crushed to death on Sunday morning in the Johannesburg suburb of Windsor East. 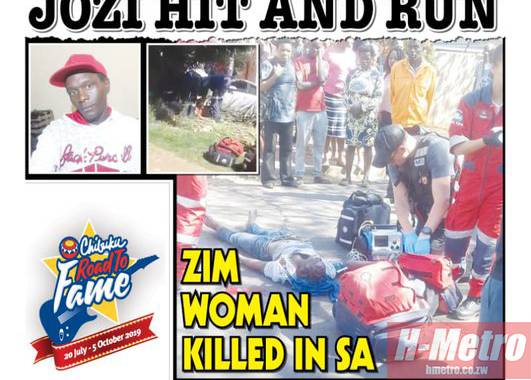 The woman was identified by police as 31-year-old Geraldine Nyaradzo Mudimu.

According to witnesses, the car was being driven by an unlicensed Nigerian national who was whisked away by his friends.

He has not been found since.

“Yes we can confirm the death of the woman who was hit by a car. The same driver first hit and injured another man who was ferried to Helen Joseph Hospital with serious injuries. We are still looking for the driver who is still on the run,” said a police detective working on the matter.

He will likely be charged for murder, attempted murder or alternatively culpable homicide as well as defeating the ends of justice by evading from the law.

The suburb came to a standstill as residents, the majority of whom are foreign nationals, descended on the scene to catch a glimpse of the incident.

“The accident was horrific. The driver was speeding and he first hit the guy, lost control and then hit the woman who was waiting for a taxi,” said Lesley Makumbe who was among the first ones to arrive on the scene.

“It was a very painful death as she was dragged underneath the car for about 50 meters before it was stopped by the wall. Paramedics struggled to pull her body out as she had already passed away,” said Makumbe.

This is the second accident along the same spot six years.

In 2014 two sisters lost their lives after being hit by a car as well.

The injured man was identified as Ntuthuko Mkwebu also a Zimbabwean and sustained a serious head injury and he is in Intensive Care Unit. His friend Elvis Chiwanda who comes from Malawi says he is likely to make it.

“Yes he is still in intensive care but the situation is improving. I actually praise God because it could have been worse. I have worked with him for a very long time and he is a good guy,” said Chiwanda. H-Metro

‘Govt has no plans to abandon Zimdollar’

Social distancing on aircraft ‘nice’ but…

Mamombe nominated as one of five world’s most…