A Chitungwiza man stands accused of dumping his sick wife who later blocked him from wedding his new wife. 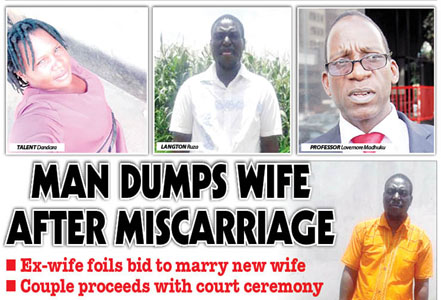 Langton Ruza is accused of abandoning his ailing wife Talent Dandara who later blocked him from wedding his new woman.

Dandara foiled Ruza’s wedding with Cecelia Thomas which was supposed to be held at St Monica Roman Catholic Church in Chitungwiza by demanding divorce token.

Ruza had not paid the divorce token rendering their customary marriage subsisting.

It is reported that Ruza was then advised of the matter and that the wedding would not proceed since his ex-wife was disputing it after the intention to marry was publicly announced in the church as per church doctrine.

Ruza was furious with a priest, who then advised him to take the legal route, and resolve the issue since his ex-wife had threatened to disrupt the wedding.

H-Metro spoke to Dandara who said that she was hospitalised for three months after another miscarriage while her husband Ruza was seeing the woman.

“We used to fight a lot and it got worse with the miscarriages when I was hospitalised, my baby was growing outside the uterus and that’s when all the trouble started.

“The doctors told me that I had to take eight months to recover that’s when my husband started seeing a woman named Cecilia Thomas and they even had the audacity to sleep at our home while I was struggling in hospital.

“This woman later claimed that she was pregnant with Ruza’s child which prompted him to rent a house for her and up to now they have not yet paid gupuro,” she said.

Contacted for comment, Ruza could not to elaborate on the accusations.

“What do you want from me and where did you get that story from because I am done with that issue.

“If it’s Talent who gave you my number then she must give you what you want.

“I don’t want to talk to you so you can go and get the comments from the one who gave you my number or else I can sue you, you don’t know whom you’re dealing with,” he said.

“The woman has the right to contest under the customary law marriage and it was right for the priest to stop the wedding.

“Even if the wedding proceeds to the courts it will still be void,” said Prof Madhuku.

A source said that Ruza then proceeded to wed at the magistrate courts and Dandara confirmed that she is still pursuing the matter with her lawyer. H-Metro

Render to Caesar! . . . Pastor “expels” congregant for not tithing?